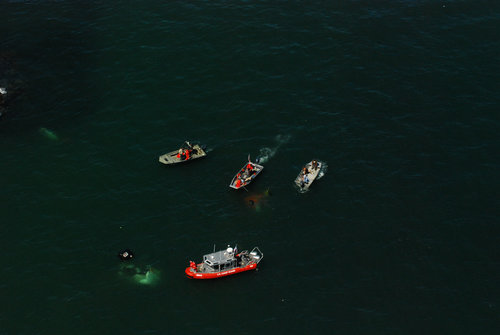 A candlelight vigil is planned in Sitka tonight to honor the Coast Guard crew killed in a helicopter crash off the coast of La Push, Washington. There’s no official gathering place, but the City of Sitka and the Sitka Chamber of Commerce are inviting people to light a candle at 11 p.m. tonight from wherever they happen to be at that time. Meanwhile, investigation and salvage efforts continue at the crash site.

“They were unable to do any salvaging yesterday because of the fog,” said Coast Guard spokesman Petty Officer Nathan Bradshaw, in Seattle. “They started this morning sometime between 7:30 and 8 a.m. So far, as of 11:18 this morning, they recovered two of the four pieces of the MH Jayhawk helicopter.”

The survivor, Lt. Lance Leone, is in a Seattle hospital recovering from a broken arm and leg.

Leone is scheduled to be released from the hospital on Monday, according to Bradshaw, at which point he’ll meet with crash investigators. Bradshaw says there’s no timeline for the investigation to be complete.

Bradshaw said these types investigations can last as long as six months or more.

In Sitka, preparations are underway for a memorial service that will be held at 2 p.m. on Tuesday at the Coast Guard hangar. The Coast Guard’s highest ranking officer, Adm. Robert Papp, is scheduled to attend. Other officials from within Alaska have been invited as well but have yet to confirm.

Additionally, St. Michael’s Orthodox Cathedral, downtown Sitka, will offer up prayers for the crew at its 9:30 Mass on Sunday. The Cathedral also will have an 11 a.m. memorial service for the crew, followed by a brunch.

Several tributes to the crew of the helicopter have also popped up online, including on the social networking site Facebook.

A tribute page started Wednesday afternoon had nearly 6,300 members on Friday afternoon, with thousands of expressions of grief, support, prayer and comfort posted over the last three days.

The page was started by Ken White, a search-and-rescue volunteer from Powell River, British Columbia, about 80 miles north of Vancouver.

“My purpose was to tell everyone at Coast Guard Air Station Sitka there that the international search and rescue committee is feeling your loss,” White said.

He said he doesn’t know any of the crew members, or even anyone who works at Air Station Sitka, “but because they’re part of the international search-and-rescue community — the people from Coast Guard Air Station Sitka — we are feeling the U.S. Coast Guard loss too, here in Canada.”