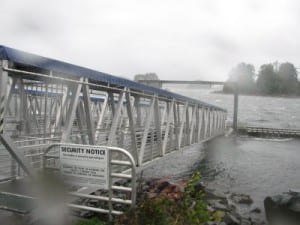 Power was out briefly in Sitka this afternoon (Wed 9-21-11) after high wind gusts knocked down a pair of power lines on Lake Street, across from the Westmark Sitka.

No other major damage was reported by local authorities, though the windy conditions are by no means over for Southeast Alaska.

The FAA Flight Service Station in Sitka reported sustained winds and gusts ranging between 50 and 55 miles per hour over the course of two hours today, between noon and 2 PM.

That was enough for officials at Sitka National Historical Park to close all trails for the rest of the day.

Windy weather prevailed over much of the region. In Chatham Strait, the fast-ferry Fairweather turned around en route to Sitka, and returned to Juneau.
The Holland America cruise ship Westerdam cancelled her final port call of the season. The Amsterdam and the Oosterdam also re-routed around Sitka this week, rather than face seas of over twenty feet offshore.

The high winds have been accompanied by heavy rains, which is a good thing for a hydro-dependant community in an otherwise dry year. On Tuesday, over one-and-a-half inches of rainfall were recorded at the Blue Lake power plant in Sitka. As a result, the level of the lake itself rose two-feet four inches. Green Lake saw and even greater rise – just over three feet.

Sitka’s electrical director Chris Brewton would be more upbeat about things if his crews were not out repairing downed lines. “For the record,” he said, “I prayed for rain, not wind!”
Windy conditions are expected to continue in Southeast through Friday.