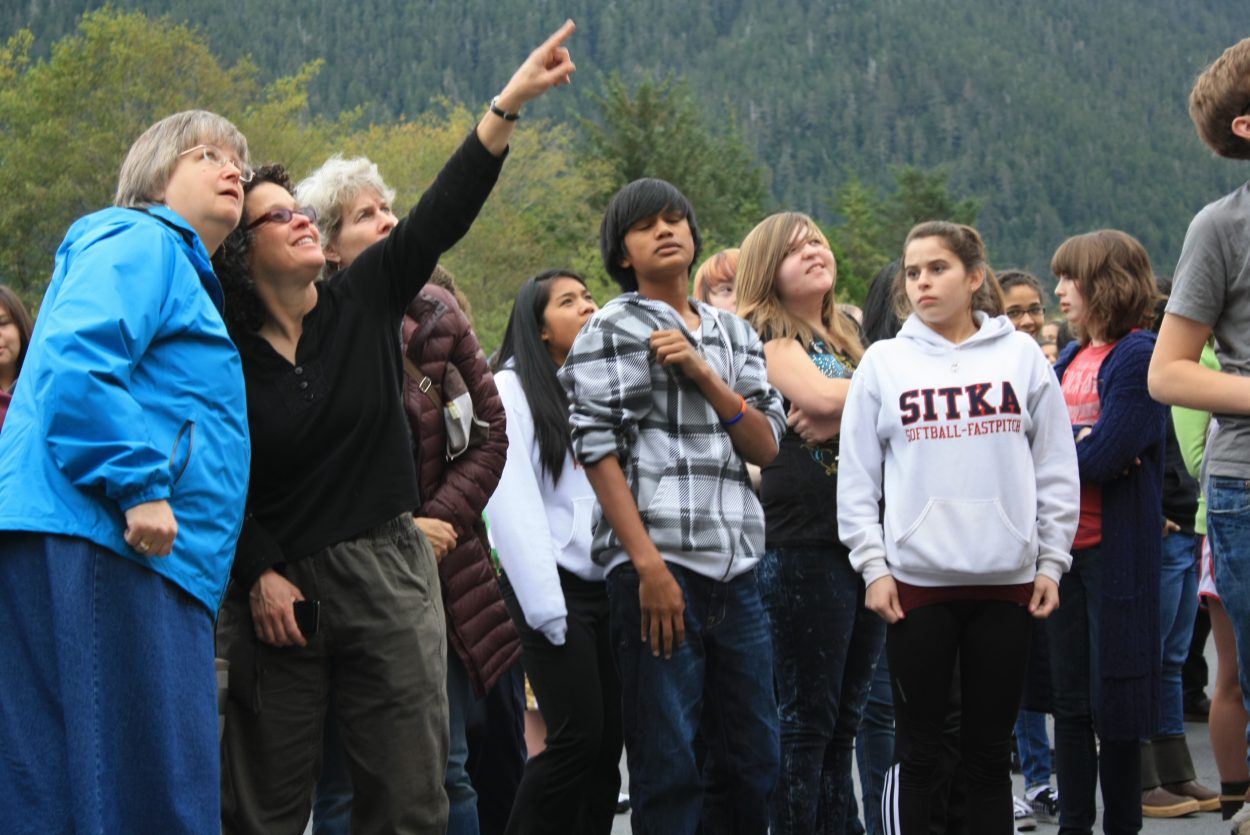 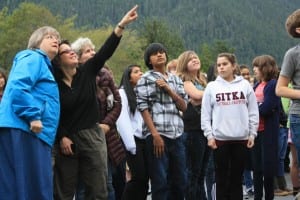 Sitka | Members of the public and the student body at Blatchley Middle School gathered Wednesday afternoon to officially unveil Sitka’s “Choose Respect” mural. The 12-foot by 24-foot artwork is attached to the side of the school building, and is the result of a year’s worth of work by artists and scores of volunteers.

At Blatchley Middle School on Wednesday afternoon, a ribbon cutting and a moment of celebration, as hundreds of people, including most of the student body, gathered underneath an enormous mural which, as of Monday, now hangs on the side of the school building.

The mural’s theme – “Choose Respect” – is no accident. It coincides with a statewide campaign run by Governor Sean Parnell to address domestic violence in the state of Alaska.

Katie TePas manages the gubernatorial initiative. On Wednesday, with the crowd gathered in the Blatchley lot, she pointed out the very visible word “respect” at the top of the mural.

The word “choose” was harder to find.

“If you don’t see it so well, look to the person next to you and say ‘show me, please. Help me,'” TePas said.

So, that’s exactly what the crowd did. Fingers pointed in the air, and people said “Ohhhh!” as the word “Choose” became visible, spread across the entire mural – the C and H behind a bear’s head. The two Os filled with symbols of Native and Russian and Filipino culture, the S and the E behind a deer.

“It was deliberate on the artist’s part to have those not jump out at you,” TePas told the crowd. “And the reason being, we are still working toward a place where everyone is respected.”

Mural organizers like Elisabeth Schafer hope that unveiling the work is not the end of a project, but rather the beginning of a dialogue about respect and domestic violence.

“Around the dinner table, as we get together with friends, as we go out for coffee, as we take our hikes with a friend, we need to talk about it and see how we can be part of the solution in our own community,” she said.

Schafer works in the district attorney’s office in Sitka. Her job is helping crime victims navigate the court system. And many of those she deals with have experienced domestic violence – a trend that translates statewide.

“The state of Alaska has epidemic rates of domestic violence and sexual assault, and child sexual abuse,” TePas said.

In 2010, a statewide survey revealed that 60 percent of adult women in Alaska had experienced intimate partner violence or sexual violence.

“And those rates are astronomical, so that’s the reason for the initiative,” TePas said. “We really need to do something and we need to be really effective at what we’re doing.”

She says Sitka’s mural is impressive, both for its scope and its speed.

“To go from just sort of a vision to a finished project within a year really shows how this community has been able to come together,” she said. “Until I saw the text behind the mural, I didn’t understand the depth and all the layering of it. It’s phenomenal.”

And hopefully, says Elisabeth Schafer, it will help people realize that building greater respect in Sitka requires every person in the community – no matter how old or young.

“I think respect is something that’s taught from infancy,” she said. “It’s taught by the way we speak to each other, to our mates in the home, to our friends, how we talk about our friends, how we respond to the driver that cut us off in the street. I think respect is multi-faceted in the way we model it to the children and other people around us, and it’s what determines whether we can live at peace, and respectfully with one another.”