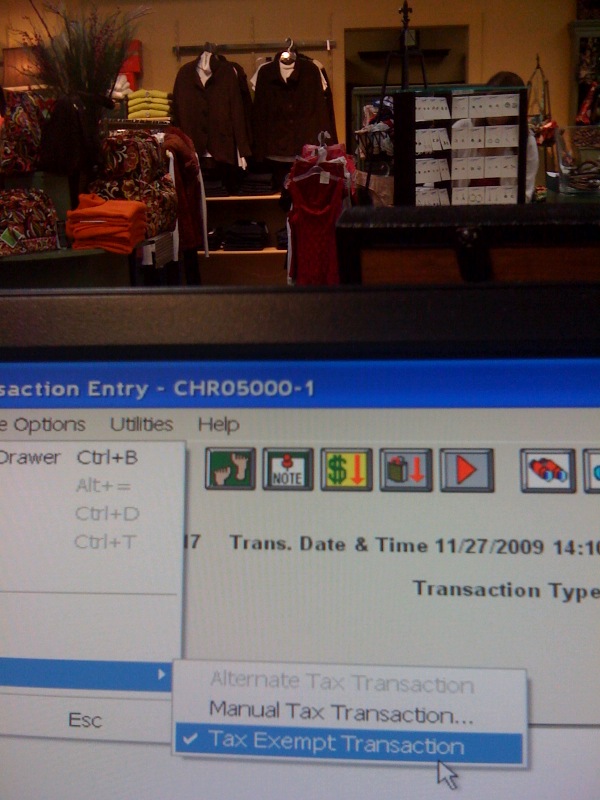 Also: The Assembly approved the sale of nine lots in its Benchlands neighborhood. Details below. 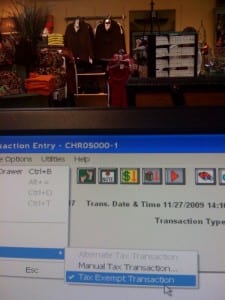 The cash register at Brenner's Fine Clothing & Gifts is set to ignore sales tax, during a sales tax holiday in 2009. (Photo: Ed Ronco)

Sitka | During a discussion at their regular meeting Tuesday night, members of the Sitka Assembly signaled that the practice of waiving sales taxes for a couple days on Thanksgiving weekend could be reduced to one day or even moved to a different weekend.

Assembly member Pete Esquiro said he also wonders whether the city has enough money to continue sales tax holidays, even though he’s always been a fan of the practice.

“They’re a good thing for stimulating business,” he said, “but if we get down to counting dollars instead of counting hundreds of thousands of dollars and all of this, when do we say no?”

Mayor Cheryl Westover said she doesn’t think the city can afford two days, but that encouraging people to shop in town during the holidays is important. Assembly member Mim McConnell recommended moving the holiday away from Thanksgiving weekend.

“Because the sales are going to be high that weekend anyway. It is all over the place. Traditionally, that’s when people go shopping because of the great sales and that kind of thing,” McConnell said. “It ends up costing the city a lot of money that weekend. It might be better to do a sales tax holiday the following weekend.”

Assembly member Terry Blake, meanwhile, said the tax holiday is a vital thing for the city to do for its businesses.

“As much money as we give away at this table, we need to show that we care about our businesses in Sitka, and we need to support them,” Blake said. “And I think this is a little piece to pay by giving them two tax-free days to show them that we want them to succeed.”

The Assembly took no action. Making the tax holiday happen will require an ordinance. McConnell will sponsor a measure with another Assembly member and bring it back to the next meeting for possible action.

Benchlands sale
Property in Sitka’s Benchlands neighborhood could be on sale before the end of the year.

The Assembly authorized the sale of nine lots along Jacobs Circle, in what’s called the Whitcomb Heights neighborhood.

The city purchased the Benchlands for more than $3 million dollars back in 2007 with the hope of developing the area into lots for sale. The lots approved for sale last night represent about a sixth of the entire Benchlands project.

Assembly member Terry Blake wanted to know whether the city will lose money on the project. City Finance Director Jay Sweeney said the total development cost of the entire Benchlands, from the time of purchase to today, is $9.7 million dollars.

That total includes grant money, and large expenses such as a water tower. Information was not immediately available last night on how much the Jacobs Circle area cost to develop.

If each of the nine lots sold for their minimum bid price, they would bring in a total of $1.1 million dollars. The question remains where exactly in the city accounts that money should go. Sweeney said written minutes from the time of the sale don’t appear to show any guidance from the Assembly on the matter, but that he’s heard the plan was to fully reimburse the general fund and the city’s enterprise funds. City staff are expected to start reviewing videos of the earlier meetings today to get more information.

The lots could go out to bid as early as mid-December. The Assembly, meanwhile, has asked for a recommendation on what to do with the money from the lots at its next meeting.