Handful of Sitkans weigh in on ferry plans 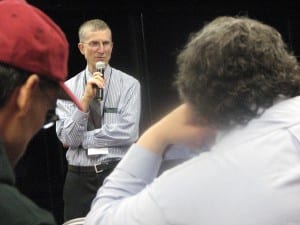 Andy Hughes, planning chief for the Southeast Region of the Department of Transportation and Public Facilities, speaks at a meeting on the state ferry system in Sitka on Wed., Oct. 19.

Sitka | Public meetings continue throughout Southeast Alaska on changes to the state’s regional transportation plan. On Wednesday night, a handful of Sitkans met with regional planners about six options for ferry service.

The regional plan is revised every five years. And State officials are looking to get the most bang for their buck in Southeast Alaska, where projections show population declining to 59,000 people by 2034. That’s roughly 10,000 fewer people than recent numbers. The projections troubled Sitka resident Harvey Brandt.

“I think that’s very gloomy, and I know it’s coming from the Department of Labor and they’re very sophisticated, but there must be one a little more optimistic than that,” Brandt said.

He’d like to see the plan include a variety of population scenarios – including some more optimistic ones. Brandt said during the meeting that he worries a low number will give politicians from other parts of the state a reason to nix funding for projects that would help Southeast.

There were six options presented Wednesday night. They address the fact that some of the fleet’s aging ships will need replacement in years to come. They also propose new routes, and in one case, a road across Baranof Island to a ferry terminal located along Chatham Strait.

“She is in favor it, she has encouraged us to talk about the road if we want better service,” Finkenbinder said. “Because what she hears is that we want better ferry service and she realizes that the money is only going to go so far, as far as getting ferries in and out of Sitka.”

The road plan would also include a highway connecting Kake to Petersburg, and build an access road from Juneau up to Lynn Canal. It further includes a new Alaska Class ferry, plus 10 shuttle ferries, and discontinues service to Bellingham, and cross-gulf service. That includes service to Yaktuat.

By creating shorter runs along Chatham Strait, planners say communities receive more service, although will experience longer travel times throughout the region. The road option has the highest capital cost – about $1 billion. But it also will cost about 20 percent less money in annual costs than the current spending levels.

Other alternatives include maintaining the status quo, matching capacity with demand, maximizing the use of current roads, and building three new Alaska Class ferries.

About a dozen people attended Wednesday night’s meeting. State officials said the ultimate plan might include one of the options or a mix of several options.

Written comments may be submitted to the state before Nov. 4. Here’s how to submit comments: