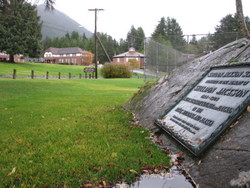 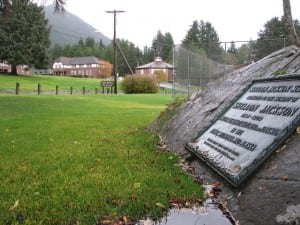 A Sitka preservation group that set its sights on a small piece of green space a few weeks ago appears to have hit its target. A small-but-important piece of land on the city’s downtown harbor will soon have a permanent public easement.

Thad Poulson, with the Allen Memorial Preservation Project, says the organization has raised enough money to buy the curved strip of land between the tennis courts and Lincoln Street – land which most people consider a part of the Crescent green strip, or Crescent park.

Poulson has played an active role in historic preservation in Sitka for decades, and he’s been a relentless advocate for the protection of the entire Crescent Park. The preservation of green space, he says, was pivotal for Sitka’s development.

Before the construction of Crescent Harbor, the area was Crescent Beach. Sheldon Jackson School controlled much of the uplands and the tidelands. According to Poulson, Sheldon Jackson leveraged the creation of the green strip.

“And they drove a hard bargain back in 1964. They insisted that the city would pass an ordinance – which they did – dedicating the whole length of the park to park purposes.”

Sheldon Jackson kept title to the 8,000 square-foot parcel on the green strip, but allowed the city to incorporate it into Crescent Park as long as it was maintained.

When Sheldon Jackson closed and began to liquidate its properties a few years ago, the city appeared to be the obvious buyer for the lot. The property was assessed at $24,000, but the trustees – deeply in debt – were asking $37,000. No one would budge.

That’s when the Allen Memorial Preservation Project stepped in. Peter Gorman sits on the board.

“This little parcel of land really plays a big part in the whole of Lincoln Street. It’s part of our landscape here in Sitka. Every bit along that streetscape counts.”

Allen Memorial sought the assistance of the Southeast Alaska Land Trust, which had brokered another complicated land exchange involving Sheldon Jackson’s beachfront property running from the Sitka Sound Science Center to Sitka National Historical Park. Thanks to the Land Trust, the city – at no cost – obtained title to the beach in exchange for wetlands which will be lost as a result of airport expansion.

The Land Trust agreed to put up $25,000 toward the $37,000 needed to buy the Crescent lot. When the city still refused to take the deal, Poulson and Allen Memorial launched a fund raising campaign, which hit its mark on October 21. Under the terms of the deal, the Sitka Fine Arts Camp – which owns the SJ core campus — will now own the lot, but the Land Trust will see that the public easement is preserved.

“Whatever happens – and I hope nothing happens – to the ownership of the Sheldon Jackson Campus, this easement is going to go on forever,” Poulson said. “That land, and its use for a public park is nailed down, as it should have been under that 1964 agreement. This is making something permanent more permanent.”

In the paradox of preservation, all this deal-making has been for the benefit of keeping things pretty much as they are. Like the beautiful beachfront walk from the Sage Building to Totem Park, nothing will change when all the papers have been signed.

“The outcome of this when all is said and done,” said Poulson, “will be nothing visible on the ground. It will still be a piece of the park, in its historic use.”