Hoonah to top Sitka in cruise visits next summer 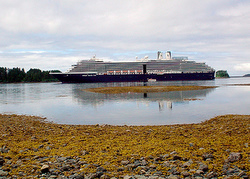 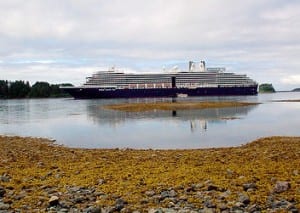 A Holland America ship at anchor in Sitka. (John Bromley/Flickr)

For the first time ever next summer, Hoonah will have more cruise ship visitors than Sitka.

Fred Reeder, with the Cruise Line Agencies of Alaska, told the Sitka Chamber of Commerce on Wednesday (10-26-11), that the Icy Straits Point cruise destination was reaping the benefits of sustained marketing, at the expense of Sitka.

“Like it or not, other communities are out stealing your cruise ship passengers right now. Icy Straits Point (Hoonah), they’ve been sending delegations to Miami and Seattle for the last six years. Who are they taking it from? They’re taking it from you.”

Sitka and Hoonah had comparable cruise visits this season, but next year Sitka will drop to 116,000 and Hoonah will go up to 140,000. Reeder encouraged the city of Sitka to improve its marketing, but conceded that geography favored the port closest to Juneau.

“The issues and the challenges facing Sitka are that we’re on the outside of Baranof, and it’s far easier to pull into Hoonah on the Inside Passage than it is to come around to Sitka because of the cost of fuel. Whatever we do, we have to be out there and make Sitka as attractive as we can.”

Reeder argued that cruise ship visitation represented real revenue for the community. He said that the city finance department traditionally budgeted about $5 in sales tax revenue per cruise visitor. Peaking in 2008 at 289,000 passengers,  cruise ship visitation represented almost $1-and-a-half million dollars in sales tax revenue. In 2010, that figure will be closer to $500,000.

Reeder framed his remarks in an overall presentation on the efforts by the Alaska Travel Industry Association to reinvigorate statewide travel marketing. Reeder played four television spots aimed at Alaska’s so-called “primary market”: College-educated visitors with no children at home, 45 to 65 years of age, who earn over $75,000 a year. Based on research, the spots all touch on Alaska’s main selling points: mountains, glaciers, and wildlife.

Here’s one of the five ads in the series.

Reeder, who until recently sat on the board of the ATIA, said the organization hoped to maintain a $20-million dollar annual budget for marketing, with the goal of building awareness of Alaska on a par with other major destinations like Disneyland, Los Vegas, California, and Hawaii.

Reeder said focus groups had responded positively to the ad campaign. Many people said the ads helped them see the state as something other than remote, cold, and snowy.

That said Reeder, was a major goal.

“What we have to do as a state is convince them that it really isn’t that big of a deal. That it’s easy to get here. That it’s an easy one to check off your bucket list.”

The return on investment is huge, Reeder said. The one national visitor industry statistic in which Alaska leads is visitor spending – almost $3,000 per person, not including travel costs. According to ATIA data, only Hawaii comes anywhere close in visitor spending, at $2,700 per person. The average for the rest of the 48 states is only $645.