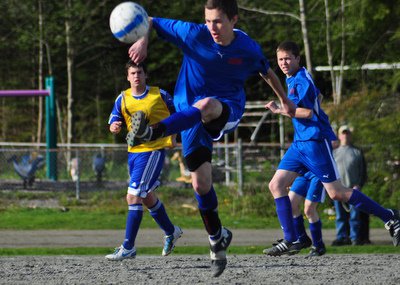 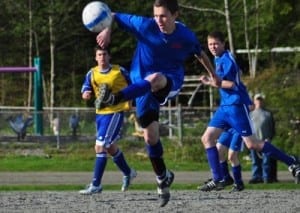 Sitka High senior Josh Risko moves the ball downfield during a May 2011 game against Thunder Mountain. School district officials are studying ways to better fund student activities, in part after a conversation about soccer, which the school board says it can't afford to fully fund. (KCAW file photo by Berett Wilber)

Sitka | The Sitka School District wants to better support activities at Sitka High School, and it plans to ask the public for advice.

In a report to the school board Tuesday night, a committee drawn up to look at activities funding presented numbers.

Three quarters of the activities budget goes to travel. More than $200,000 was paid to Alaska Airlines in 2010. An additional $54,000 was spent on ferry travel. School board member Tim Fulton said the number jumped out at him.

“One way or another, from renting cars to plane tickets to ferry tickets, it’s a huge amount,” Fulton said. “There’s not much we can do with that. It really doesn’t pay to live on an island and have these activities.”

But Fulton said he also wants to take a look at the amount of money students must put forward to participate in a sport or activity. Player fees represent nearly a third of Sitka High School’s activities budget revenue, or about $124,000.

“It’s a big concern of mine, because with those fees being that high, there’s kids that aren’t participating that might be benefitting from being in activities,” he said.

Like Fulton, Sitka High School Activities Director Mike Vieira is on the committee to study activities funding. Vieira put together the financial report presented to the school board and he said the player fees also jumped out at him.

He says in the last decade the high school has added softball, baseball and football, along with a partial soccer program. The goal, he says, is to give every kid an opportunity to be involved in an activity.

“We do that because we see that it provides another connection to the school, and keeps kids in school, and graduates them, and keeps their grades up,” he said. “We’re a 3A school, and if you look at 3A schools across the state, I think we provide more opportunities for our kids than probably any other 3A school in the state.”

The school district uses $169,000 of its own money for activities. And a quarter of the activities budget comes from fundraising. Vieira says he’s thankful for support from Sitka’s business community, too.

With the numbers in hand, the next step will be to have a conversation with the public about how to proceed.

Fulton said the public conversation will most likely take the form of a work session with school board members and the community.