The extraordinary challenges for elder care in rural Alaska 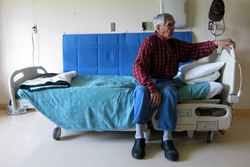 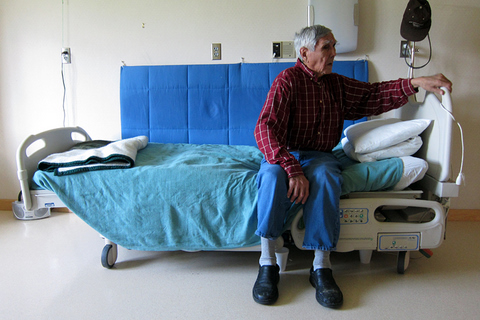 For the generation of Alaska Native elders who grew up in remote villages throughout the state, the desire to die at home runs deep.

But caring for elders in such rugged places is a complicated task. For many, aging in place is not an option.

Reporter Shaleece Haas traveled to Eagle on the Upper Yukon to find out what’s at stake for Native elders in need of long-term care.

Don Thibedeau: One step down! Now we turn. Uh huh…

Matthew Malcolm holds tightly to the arm of his caretaker and friend, Don Thibedeau, as they enter the white clapboard building that houses the history museum in Eagle.

Don Thibedeau: They said in 1930 they had a population of 54 people here.

Don Thibedeau: You were one of them. You were 5 years old then.

Matthew is now 85 – and he’s one of the last Han Guchin Athabascan elders of Eagle. He grew up fishing salmon in the summer, hunting moose and caribou in the fall, and taking dog teams out trapping in the winter.

But now Matthew is blind and has Alzheimer’s disease. He lives at the Denali Center, a long-term care facility in Fairbanks, 370 miles from Eagle. He’s only here for a short visit – just four days.

Angela Harper: He sure want to be here, even though he’s got that Alzheimer’s.

Angela Harper: And everybody’s happy to see him come back. …  But I wouldn’t want him to come back to live here. To tell you the truth, there is no one to take good care of him.

Eagle is a serene and beautiful place. But it is also a hard place. The road is impassable nine months of the year. Winter temperatures often reach 40 below. And the only medical care for hundreds of miles is housed in a three-room, 40-foot trailer.

Cindy Nation is the director of the home care program at Tanana Chiefs Conference – the agency that provides heath care in Eagle – and in 38 villages from Alakakit to Northway.

Such challenges are just part of what makes providing home care difficult in remote villages. Young people continue to leave in search of work. And most state and federal funding for home care services has dried up.

Donna Westphal is a volunteer caretaker.

Donna Westphal: We really have nothing here. Just someone like me who’s wiling to help out and take care of people.

In 1998, Tanana Chiefs had 68 trained nursing aides on their payroll. Today, they have none. Cindy Nation says that elders who stay in the village often give up life-extending medical care. But those who leave also make a painful choice.

Donna Westphal: I wish we could do that for Matthew.

Donna and her husband used to care for Matthew Malcolm before he moved to the Denali Center.

Donna Westphal: I know him very well and I know that it means the world to him. I mean, It’s all he wants to do is to come home. 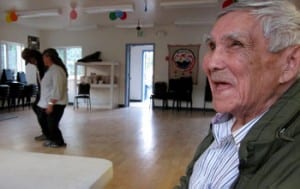 On this Sunday night, nearly all of Eagle’s 150 residents are crowded into to the community hall. It’s pot-luck dinner and people fill their plates with potato salad, salmon bake, and moose spaghetti. Barry Westphal, Donna’s husband, sits down beside Matthew at a long table.

In just a few days, Matthew will make the long trip back to Fairbanks. He’ll return to his room in the dementia wing at Denali Center, far from the Yukon River and his favorite fishing spot.

But tonight, Matthew is making the most of this visit, surrounded by the people he knows best, in a place that is both familiar and comforting.

Barry Westphal: It’s so good to see you again, Matthew. I’m glad you made it to Eagle.

Matthew Malcolm: I’ll let you know if I catch any fish.

Reporter Shaleece Haas served as KCAW’s news intern in 2009, where she reported on a number of issues related to aging and health care. She screened her graduate documentary “Old People Driving” in 2010. Haas, who is now an independent film maker, produced this story with support from the MetLife Foundation Journalism in Aging Fellowship, a program of New America Media and the Gerontological Society of America.