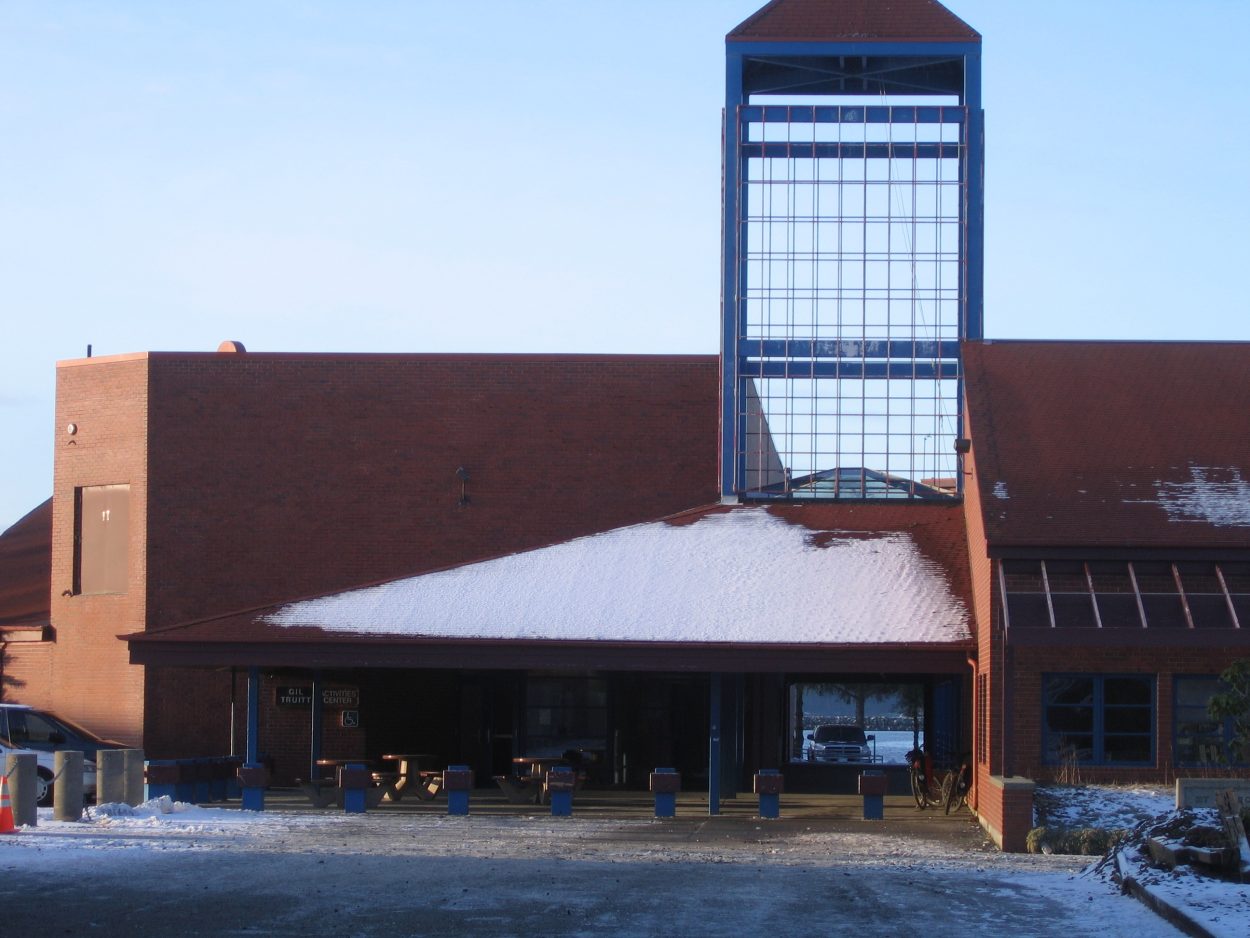 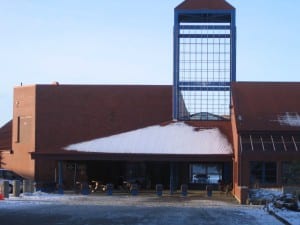 Mt. Edgecumbe High School in Sitka is home to hundreds of students from all over Alaska. (KCAW file photo)

Sitka | The storm isn’t over, but the worst appears to have passed for many communities along Alaska’s west coast. A monster storm packing hurricane force winds and high seas came out of the Bering Sea this week, causing places from Unalakleet to Point Hope to brace for the worst.

And students at a state-run boarding school in Sitka have spent much of the last 24 hours working to reach family members back home.

It’s lunchtime at Mt. Edgecumbe High School in Sitka, and students are shooting hoops in the gymnasium. The school is home to hundreds of students from all over Alaska, including many from communities along the state’s west coast.

For them, the last day has consisted of phone calls home, trying to get any word they can from relatives in the storms’ path. A group of students gathers in the entryway of the gym and I ask them to raise their hands if they’ve spoken to anyone back home in the last 24 hours. Most of the hands go up. Michelle Slwooko’s does not.

“I’m trying to get ahold of my mom and my brothers, but the cell phones and the home phones aren’t working,” Slwooko says. “I’m really worried about my family and my dog.”

Slwooko is a senior at Edgecumbe. She comes from Gambell, on the northwest tip of St. Lawrence Island. She might be one of the few who hasn’t been able to reach home yet, but even among those who have, the updates have been sporadic. And that’s difficult when you’re far away, says senior Evelyn Komonaseak, from Teller.

“It’s kind of scary not knowing what’s happening, just because we’re so far away from home,” says Komonaseak. “You don’t know if everyone at home is safe just because of the lack of communication and all that.”

Komonaseak says she’s reached family back home: “It was really windy and they all had to evacuate to a new site – more houses two miles south of Teller. I haven’t gotten anything else.”

Senior Janice Homekingkao is from Koyuk – a community of about 300 people at the north end of Norton Bay, between Unalakleet and Nome.

“I just got off the phone with my dad and he said it flooded badly and the caches went down – where they hang dried fish – they all went down,” said Homekingkao, adding that it was just good to hear voices from home. “Yes, I was so worried last night I called my dad and I made sure that all my siblings were home. He’s like, ‘OK, you don’t have to worry.’ They were all fine in the morning.”

They say Facebook has been more reliable than the phone in many cases. And their feelings are mixed on being so far away from home. Some said it was difficult not to be with family right now. Others said they were glad they missed it. But all of them, including freshman Dani Merculief, from St. George Island, say it’s been important to have other western Alaskans at school.

“You get a better understanding and you have people supporting you while you’re worried,” Merculief said. “They know what you’re going through.”

Edgecumbe’s academic principal, Bernie Gurule, says the school has relaxed its cell phone policy. If students get calls during class they can step into the hallway and answer. And those who don’t have cell phones can use school phones if they need to reach home.

Gurule says the students are taking things in stride, but also that the mood in the school has definitely changed.

Gurule says even he’s been impressed at their ability to keep in touch with friends and family on the other side of the state.

“I think a few years ago it might be a little bit different,” Gurule said. “If not everybody had a cell phone, if not everybody could get on Facebook, or whatever the case may be. There’s a lot of communication going on right now, and that’s probably the best that could happen right now.”

With so many students from all over the state, almost any major event in Alaska is bound to resonate here. Gurule says this might be the first one that’s impacted so many students at the same time.