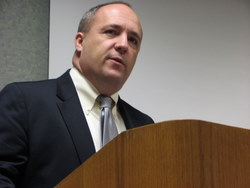 The top federal lobbyist in the northwest for the US Chamber of Commerce says it’s all about jobs.

Strow is a former two-term legislator in the state of Washington, who also served as a congressional staff member. This was his first swing through Alaska in his new job.

He told the Sitka Chamber that he had been to the community once before on a Holland America cruise ship, but the weather was socked in. This business visit, however, was spectacular.

The incredible scenery may have prompted him to begin his presentation assuring members that the US Chamber was not anti-environment.

Here’s an excerpt of his remarks.

“The US Chamber is often characterized as being less friendly to the environment than is fair. It would put a lot of time and effort into working through our member companies to develop innovative thinking on federal policy-making that will support the creation of more environmentally-friendly technologies. There are roles for the federal government in this, but there are roles where the federal government shouldn’t be butting in. And one of the challenges that we have also is to say Hey, guys, this might be overstepping it. I’ll give you a real easy example: Just recently the EPA decided that they wanted to regulate dust. Just something to think about. Not regulating anything man-made, but regulating dust. In particular, sometimes when farmers plow the ground, you know some dirt might get in the air after that. It’s kind of an issue where you have to think about what is the appropriate perspective and how does it play out? It plays out through higher food costs. Those rules probably won’t go into effect, thankfully, but other regulatory decisions made by the federal government in other parts of the United States – and as impact our trade relations overseas – those can truly have an impact on your pocket-book. Where there are higher transportation costs, and the cost of food and of goods and services that are brought right here.”

Strow went on to outline other policy positions of the US Chamber, and to describe the makeup of the organization, which he called “the nation’s largest trade association.”

He told Sitka chamber members that he would “be back within a year – I promise.”