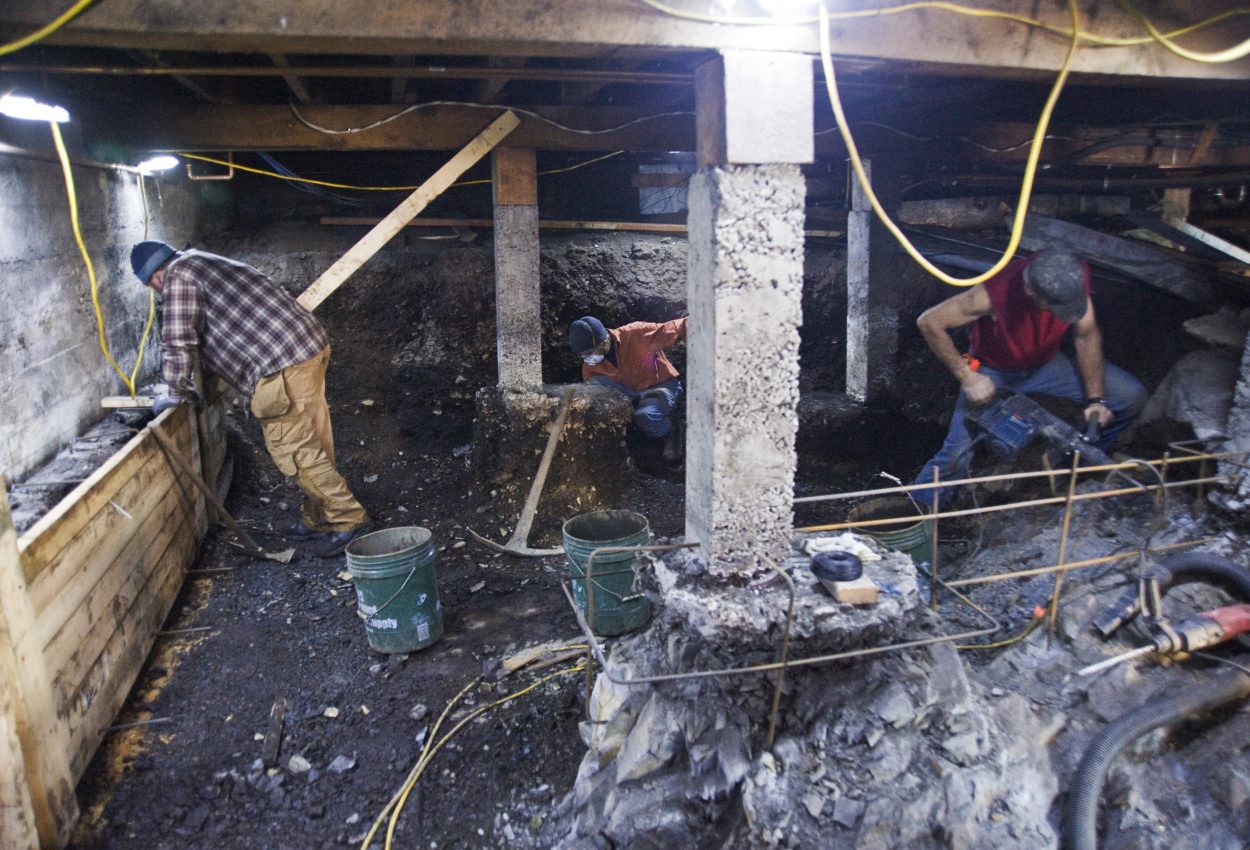 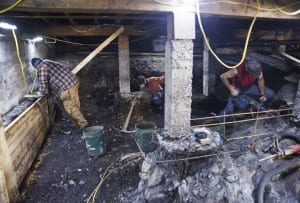 Workers continue structural improvements on the historic Cable House, home of Raven Radio, Thursday afternoon. Human remains were discovered in a different part of the basement, which is now cordoned off. (Photo by James Poulson/Daily Sitka Sentinel)

Sitka | Contractors working in the basement of KCAW discovered human remains in late October. The remains are believed to be old, and likely predate the 103-year-old building that houses the station.

The remains were found in between two slabs of bedrock, and are believed to be very old. KCAW General Manager Ken Fate says when the discovery was made, work was stopped immediately.

“And the first thing we had to do was figure out what to do,” Fate said.

The police were contacted, and with the help of an archaeologist, determined that the remains were old, and that the area was not a crime scene. Forest Service archaeologist Jay Kinsman then looked over the site for other materials – namely, wood or fiber.

“Those things would be clues as to when the bones were there, and possibly where the bones had come from. But there was none of that,” Fate said.

Fate says the archaeologist who looked at the site said he was unable to determine the age, sex or ethnicity of the remains.

“Initially, they felt the ceremony should be done regardless of whether the remains were Native or not, to pay respects and apologize for the disturbance,” Feldpausch said.

Fate, from KCAW, says the next step is to learn more.

“The area appears to be, according to the archaeologist on site, fill that was put in place in the Russian era, and so whether or not the skeleton was there before the building was put up, or after, is unknown,” he said. “Talking to elders that came over from the Sitka Tribe of Alaska, they indicated that this area was not a village site, and was not a cemetery. So there is an element of mystery about where these bones came from, and when, and to the best of our ability, we’re hoping to respectfully find out as much as we can, and do the right thing by these bones.”

Feldpausch told the Tribal Council during its regular meeting on Wednesday that learning more could involve DNA testing.  If the bones are not Native, then the Tribe’s involvement would likely conclude. If they are Native bones, Feldpausch says there could be a reinterment of the remains in a more suitable location, and other protocols.

“I’m not totally familiar with them, but I know there have been some reburials in the past,” he said. “So we’re going to rely on those elders to pass that knowledge on.”

Meanwhile, work continues underneath the Cable House. The area of the basement containing the skeleton remains cordoned off and will be undisturbed.