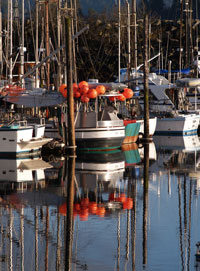 Sitka will be able to rebuild its oldest harbor, if the budget introduced by Governor Sean Parnell today (Thursday 12-15-11) passes in its current form.

Local Fish & Game authorities would also have more resources to fight a marine invasive that has taken up residence near Japonski Island.

The reconstruction of the ANB Harbor is the big-ticket for item in the governor’s proposed capital budget, at $4.25 million. ANB is Sitka’ the oldest of Sitka’s four harbors, and in the worst shape.

A final big-ticket item in the governor’s budget for Sitka is $500,000 to fight invasive tunicates in Whiting Harbor. Both Fish & Game and the University have been active over the past two years assessing the spread of the tunicate – commonly called D-VEX . The half-million dollars will finance efforts to eradicate it.

The grand total in capital projects for Sitka in the governor’s proposed capital budget is $8,826,000.

Some items in the budget for communities in KCAW’s broadcast area:

$48,000 for Angoon High School mechanical upgrades.
$600,000 for deferred maintenance in the Port Alexander harbor.
$1.8-million for a fence around the Yakutat airport.
$128,000 to Kake for renovations of the high school kitchen and showers, and completion of the mechanical ventilation project in the Kake elementary school.

The governor’s budget will undergo substantial revisions in the coming legislative session. Both the House and Senate introduce their own capital budgets; the final bill is usually a compromise between all three.