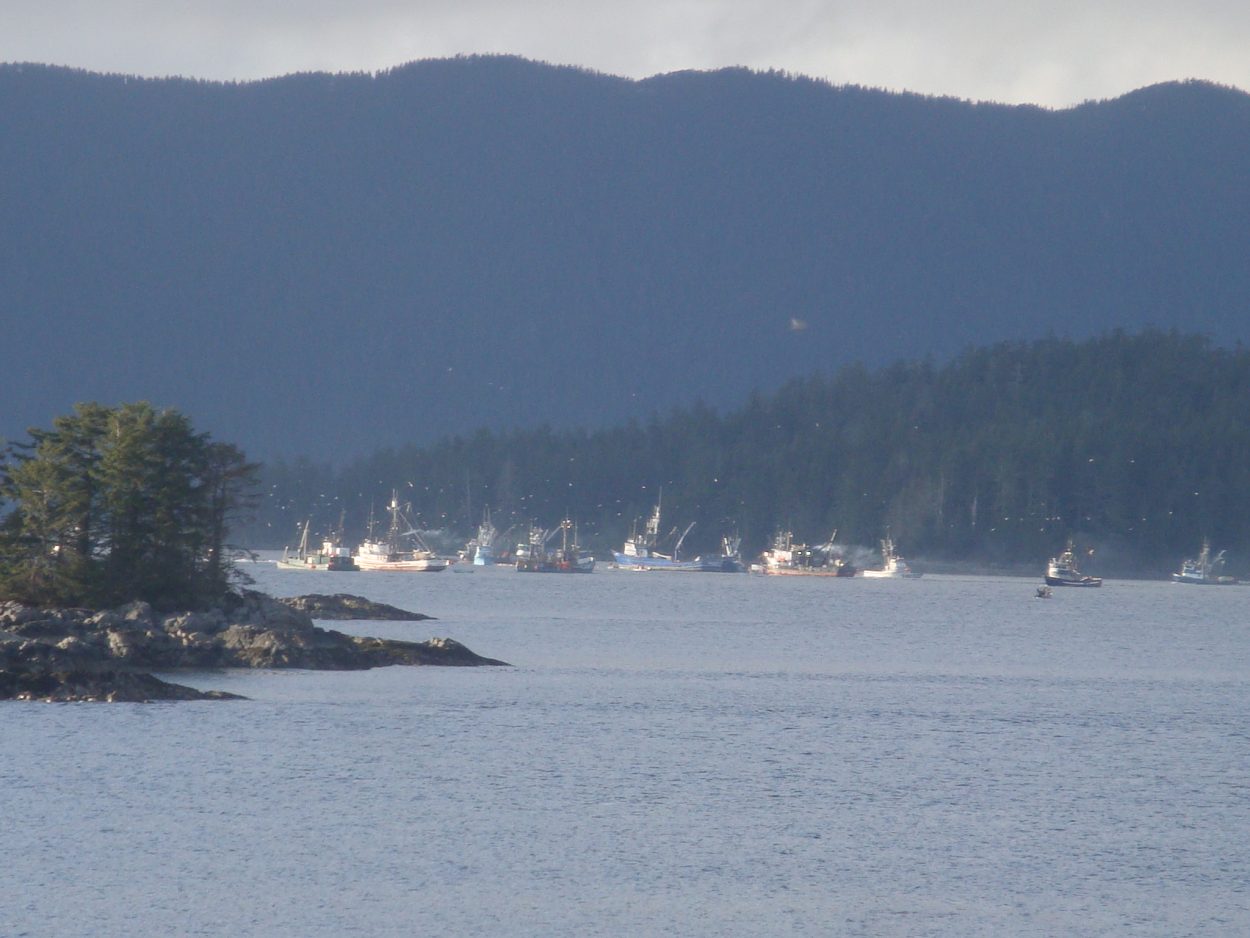 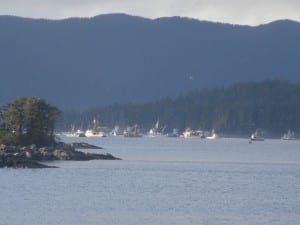 Seiners assemble prior to a fishery opening in 2010, near the Gavanski islands. (KCAW photo by Ed Ronco)

A predicted record forecast for the Sitka Sound sac roe herring, of 29,008 tons, is at least in part because of a data correction made by the state.

This year’s preliminary guideline harvest level, or GHL, is a big change from last year’s. The Alaska Department of Fish & Game says the jump is partly because of a correction to errors in determining how old the herring are, which led to under-forecasting.

Last year’s GHL was around 19,400 tons. This year, the forecast amount is about 29,000 tons. The 10,000-ton increase is partly due to Fish & Game correcting an error in the way it was determining the age of the herring.

Dave Gordon is the commercial fisheries area management biologist for Sitka. He says herring are aged by looking at their scales.

“So, the scales are taken from the herring, and this is actually done in a lab in Juneau, and mounted on a slide, and then using microfiche kind of equipment, they blow that scale up onto a screen,” Gordon said.

Once the scale is magnified they can count lines in it – almost like growth rings in a tree. Almost.

“Not quite as simple as a tree, where you just simply count the rings and say ‘The tree is this old,’” Gordon said. “On scales, you have a number of growth rings in a given year, but due to the seasonality changes of growth that a herring experiences, you get these annulus, or check marks, where you note that change in the distance between the different growth rings.”

Count the annulus, know the age. But they’re easy to misread. And as a result, Gordon says Fish & Game had incorrect data from 1999 until 2010.

“Since that experience we certainly have become a lot more rigorous in setting a criteria as to what would be called an annulus,” he said. “If an ager has a question about what he might think is an annulus, he’s supposed to involve other readers to help determine whether to call it an annulus or not.”

The model used to create the forecast is complicated, and it includes many factors – everything from abundance to survival rates to maturation rates to age. But basically, if one of those variables is off – in this case, age – you get a different result.

Gordon says the result of the incorrect data was that scientists were underestimating the biomass, and therefore setting a lower GHL. In fact, last year, they used a different model altogether because they caught the incorrect ages in time.

But not everyone agrees with that assessment.

“Personal reaction, I was flabbergasted,” said Jeff Feldpausch, resource protection director for the Sitka Tribe of Alaska. “I think it’s safe to say that we have grave concerns over a 30 percent increase over last year’s GHL, to bring this year in at 58 million pounds of herring. I think it’s safe to say we feel it would be irresponsible to harvest the entire GHL.”

The Tribe has long expressed concerns over the commercial fishery, namely that the herring are being overfished. Southeast Natives harvest herring roe on hemlock branches as a traditional food.

“We look back at historic levels from the late 1800s, early 1900s. Herring populated all of Southeast,” Feldpausch said. “There are remnants of herring reduction plants up and down Chatham Strait, but there’s no herring there anymore – at least viable stocks to subsist on, or commercially fish.”

The Tribe’s herring committee brought forth a proposal to set a subsistence-only zone along Sitka’s road system. It failed to get the recommendation of a local advisory committee, but still will proceed to the Board of Fish for consideration in February.

Meanwhile, the preliminary GHL of 29,000 tons is not set in stone. Winter test fisheries will take place in January, and a final forecast will be announced in late February. Gordon says the number can sometimes change by as much as 10 percent.