Lake levels up, but diesel still needed for power 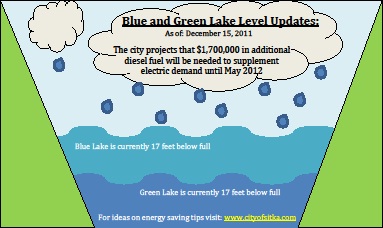 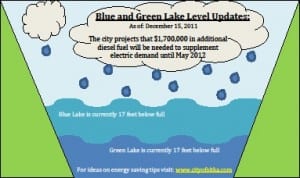 Click the image to enlarge: This graphic, from the city's Electric Department, shows lake levels on the rise. They were 22 feet below full at the beginning of the month, and the diesel estimate then was more than $3 million. (City of Sitka graphic/Bitty Balducci)

Diesel generators in Sitka are running on an extra shift, a change made last week despite improvements to the city’s hydroelectric situation.

Low lake levels this year in Blue Lake and Green Lake, where the city generates its hydro power, have caused the public utility to run diesel generators as a supplement, especially as winter moves in and people turn on electric heaters.

“Last week, we ramped up to two shifts per day instead of one, from the previous two weeks, when we’d been running just one shift,” said Utility Director Christopher Brewton. “So we’re accelerating some of the diesel operations to try and make sure we keep the lake levels up.”

Brewton says they’re trying to spread out the diesel usage, rather than draining the lakes and needing to use even more diesel power later.

That strategy, plus recent rainfall and snow melt, appears to be helping. In the last couple weeks, the lake levels have begun to rise again. They’re now 17 feet below full, with the city estimating it will need to spend $1.7 million on diesel between now and May. It’s an improvement from the beginning of the month when lake levels were both 22 feet below full, and the city projected diesel costs of around $3 million.

The improvement, though, doesn’t mean Sitka’s diesel surcharge is going away. Brewton says his staff will calculate the surcharge amount at the end of the month, and set an amount for the first quarter of 2012. He estimates it will be around 2 or 3 cents per kilowatt hour.

The surcharge will appear on utility customer bills, and is designed to defray the cost of diesel. It’s expected to be adjusted quarterly, as needed.

While all of that is going on, the city continues to urge Sitka residents to conserve power by switching to non-electric heat where possible. And it’s getting more creative in the ways it conveys the message. 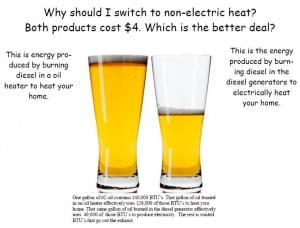 (Click to enlarge) As the city tries to convey the need for energy conservation, it's turning to more unconventional imagery to make its point. (City of Sitka graphic)

The latest attempt was a graphic showing two beer glasses. One, representing a home heating source, like an oil stove, was full of beer. The other, representing the city’s diesel generators, was only a third full. Brewton explained:

“The idea behind that image is that if you pay for a gallon of fuel, it costs $4 whether you run it through an oil furnace or you run it through our diesel generator. If you run it through an oil heat source in your home, like a Toyo stove or something, 90 percent of the energy in that oil will be used to produce useful heat for your home, and 10 percent will go out the stack as exhaust and waste heat,” Brewton said. “Consequently, if you run that gallon through our generator, 35 percent of the useful heat in that oil will get utilized to produce electricity. 65 percent of that goes up the stack as exhaust and waste heat.”

In other words, Brewton says diesel is better used at home than at the city’s massive No. 4 generator, which chugs through more than 250 gallons an hour.