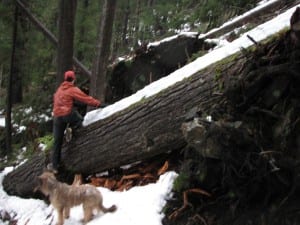 A storm that slammed into Sitka in mid-November made news at the time for its sudden violence, sinking two boats at their moorings in the harbor, as well as damaging the harbors themselves.

While the damage to man-made structures was heavy, a further toll from the storm is just now being understood – in the forest along a popular trail just outside of Sitka. Geologists refer to the event as a “mass wasting” – the wholesale destruction of an area of forest due to any one of several kinds of avalanche or debris flow.

Mass wasting is not unusual in the Tongass – every so often large swaths of relatively young and exposed forest are toppled by high winds and slides. But the mass wasting that destroyed the Beaver Lake Trail occurred in old growth, and two hikers were there to see it go.

“As we got up between Herring Cove and Beaver Lake, I heard a snap. I thought maybe a gunshot. Then I thought, It’s a branch, maybe breaking somewhere up in the woods.”

Bob Hunter and his son Matt are chronic hikers. They went out on the Herring Cove/Beaver Lake trail on Saturday, November 12, Bob says, because his wife wasn’t home to tell him it was a bad idea.

“And we turned the corner, and could see Beaver Lake now, and hiking along that part that parallels the Beaver Lake trail. Then I looked up and I saw two big trees snap – at least I heard it – then saw two big trees coming down about 50 to 100 yards in front of us. We had stopped because there was a branch down in the trail that made it hard for the dog to get across. So we had to get the branch out. I thought, Wow, that’s fascinating, we’ll let this happen and then go down and investigate. Then two trees closer – big trees – up on the hillside snapped, and I yelled Retreat!”

Bob is a local physician. The dog by the way is a Shih-Tzu, and those short legs bought the Hunters just enough time to realize that what was happening was not business-as-usual for a blustery autumn day. Matt is a math and science teacher at Mt. Edgecumbe High School and a member of Sitka’s mountain rescue team.

“This did not seem any windier than hiking up Verstovia on a mild day. And suddenly it got real windy, right at the edge of Beaver Lake. As soon as that one tree came down, it was like dominoes. I wouldn’t say it was more than ten seconds or so that we saw or heard and it seemed like they were getting close to us. As we started backtracking, we heard another loud snap and could see another tree falling – a little closer, and that’s when the self-preservation thing kicked in a little bit.”

In the end, almost fifty trees – some 4-to-5 feet in diameter – fell along a 300-foot section of the trail. Matt Hunter’s recollection of the sudden severity of the storm is consistent with that of harbor users, who say a routine westerly just detonated. Their eye – and ear – for detail is an important part of piecing together what happened on the Beaver Lake trail, because mass wasting often starts with windthrown trees. Mix together an unusual wind event, a steep slope, thin soils, and buckets of rain or snowmelt, and the result is what the Hunters saw when they went back to Beaver Lake a few days later.

“When we stand at the spot where we stopped there’s a huge amount of denuded hillside above us, but the immediate trees by the trail are still standing. And then as you look up at the hillside above Beaver Lake as you go from right-to-left, it’s come completely down and covers the trail.”

Here’s an expert opinion. “Windthrow is probably the biggest thing that would generate any kind of slide in an old growth stand.”

Doug Swanston is a retired research geologist. He spent 30 years with the Forest Service, many of them in the Forestry Science Lab in Juneau. I called Swanston because I didn’t understand two things about the Beaver Lake blowdown. 1) Why, if this storm was a westerly, did all the trees fall toward the west? And 2) Why did this happen in a stand of trees that has withstood everything Mother Nature has thrown at it for the last 4 or 5 centuries?

Swanston says mass wasting often involves a weakening of the soil structure. The Hunters witnessed the first blowdowns; the rest of the huge trees fell over when the ground gave way.

“These debris avalanches and flows are more like a rug that’s slipped out. There’s a failure at the top end where the trees blew down, and the material is displaced downslope.”

Secondly, old growth is only old to us. Swanston says he and other researchers have documented old growth forest on the remains of ancient slides. It’s all part of a forest cycle that occurs outside of the human timescale.

Deb Lyons knows about timescale. “We’ll have to just be Alaskans and say, Another big Whoop from Mother Nature, and just deal with it.”

Deb Lyons is the director of Sitka Trailworks. The Beaver Lake trail was opened in 2009 to great fanfare, the final link in a $3-million trail system designed in the aftermath of the closure of the APC mill in Sitka. Ironically, Lyons grew up in a logging tradition. She says the damaged trail reminds her of a “coal deck,” where loggers staged felled trees before they were shipped out.

“From my end of it, all of the paperwork, all of the planning, all of the funding, all of the bureaucratic hoops – it takes years to get these projects to where they get built. And that’s usually where we get our pat on the back, when people see the trail being built they say, Hey, great job! But they have no idea about all the petty, dumb, but I-guess-required stuff you have to do to get the trail built. So, having the trees go down? That’s not as intimidating to me as some of the other things we’ve faced.”

And Bob and Matt Hunter? Still hiking, though Bob says the Shih-Tzu has been a little skittish lately. It’s interesting that Doug Swanston and other researchers who study mass wasting have tried – unsuccessfully — to set off small debris avalanches. To see one in action, in old growth, is a once-in-a-lifetime event. At least Matt Hunter hopes that’s the case.

“In retrospect it would have been very dumb to have died on a high wind warning day, yet I feel that with all the things I do in my life some risk is merited just to have good experiences, and that was really impressive to see.”

The Forest Service plans to begin work to clear the Beaver Lake trail in early summer. Agency officials do not yet know to what extent the trail will be rerouted, if at all.