Burgess Bauder: Pro bono vet does it “for the dogs” 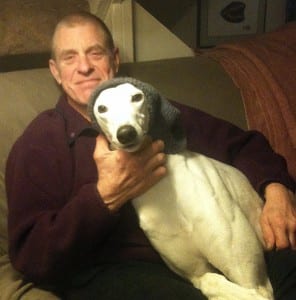 Although Rex Harrison would never be cast to play him in the movie, Sitka’s longest-serving veterinarian does something that not even Dr. Dolittle could do: practice medicine for free.

For over thirty years, Burgess Bauder has made his living as a dive-fisherman and lighthouse keeper, but his passion has always been providing pro-bono care to Sitka’s pets.

Reporter Diana Saverin visited Sitka last summer on a Kingsley Trust Fellowship from Yale University, to interview Sitkans who were profiled in a study of the community’s distinctiveness.

The paper “Up for Discussion: What makes a Sustainable Community?” was written by Gary Holthaus and published by the Island Institute with a grant from Alaska Humanities Forum.

In this second part of a five-part series based on that work, Saverin takes us into the heart of Burgess Bauder’s free veterinary clinic.

These are the kinds of problems Burgess Bauder solves. He’s 67 years old, and known around town as a man of reputation—visible in the bumper stickers throughout town that read “What would Burgess do?”

He’s known for having drowned and been resuscitated while dive fishing for geoducks, and subsequently breaking his hip on a “life-affirming” ski down Harbor Mountain. He’s fascinated with lighthouses. He built one on an island in Sitka Sound that he rents out by the night – it’s become a local landmark. He’s building his second one along the shore in town.

But breaking through that sensationalism, and touch of strangeness, is a man who has served the pets of Sitka for thirty years. And while most dogs that crawl in and out of his clinic’s door have their tails between their legs no pet owner leaves without laughing.

Burgess – Have a wonderful day, Mary.
Mary – You too. You’re my favorite vet.

More than laughs render the occasional visit to this vet unique. And many aren’t sure how to deal with the way Burgess does business.

Pet owner – I want to make sure I don’t owe you more. And your services?
Burgess – What services? I stuck a needle in your dog. $10 is plenty, trust me.

“If you’re reasonably observant, you use your special senses. You look, you listen, you smell, you feel – and if you’re really dedicated, you taste. And you report things that this might be.”

Maybe if he was tasting more often, he would charge more. Everything else he does–commercial fishing, property rentals—supports his pro bono practice. To most professionals, “pro bono” means occasionally doing free work for a good cause. For Burgess, pro bono is central to his vision. Taking money for this work goes against his nature.

And he takes little credit for providing this health care.

He first came to Sitka for three reasons: It was abundant in sea water, there were cats and dogs, and there was no veterinary clinic. Since then, he’s worked with the animal shelter and built a new clinic that’s next door to one run by his wife, also a veterinarian, who runs a more traditional practice.

“The two veterinary practices are separate, and not-quite-equal. I try and tailor my practice socio-economically. I’ve always been saddened by the fact that many people have nothing – Why in the world should a pet suffer because they can’t afford to pay? In forty-one years of doing this, I’ve never had a problem with someone being unable to pay. I just make it easy. If they can’t afford it, I’ll do it, if you can afford it, pay. Hey, do it for the dog. A point of personal philosophy.

While he mostly “does it for the dog” around Sitka, he’s “done it” for some other animals in the past, as well.

“Working on cattle. Some of my best memories in the profession are being in a rainy barn, doing a C-section on a cow at 2 o’clock in the morning – just the smells, the sound of the rain on the corrugated rusty roof, a new born calf nuzzling you while you sew up mom — it don’t get no better than that. Men don’t get to give birth, but we can participate in it. Doing C-sections on large animals is absolutely magic.”

While there aren’t any cows on Baranof island, he manages to work some magic each afternoon for the cats and dogs, after a morning spent walking his bird and doing carpentry.

“I hope I got another nine years in it. I don’t know. I’m thinking of only doing Chihuahuas – no more Rottweiler’s. Because you have to lift them up on the table. Chihuahuas are easier than Rottweiler’s, as I get older and more enfeebled – Chihuahuas only.”