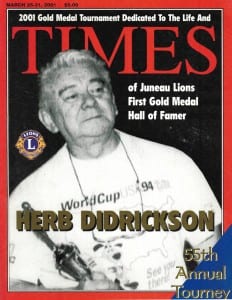 It’s hard to think of Herb Didrickson as anything but fast. Decades since he left the basketball court and the track, this respected Tlingit elder still elicits knowing smiles from those who saw him play, and those who continue to hear the stories of how the young Didrickson crossed cultural barriers through sports.

In 2010, Didrickson participated in a study of Sitka’s distinctiveness. This last summer, reporter Diana Saverin visited Sitka on a fellowship from Yale to meet some of the people who contributed to that report.

In part three of her five-part series, Saverin finds in Herb Didrickson a modern man who says he owes a great deal to his cultural roots, and to his education at Sheldon Jackson school.

That used to be our post office there. Castle Hill…

Herb Didrickson grew up in Sitka village, and went to Sheldon Jackson when it was still a training school for Natives in the 40s. He’s seen the town undergo all sorts of changes in his lifetime—from the physical landscape, to its role in global shifts between war and peace, to race relations. He hasn’t stood on the sidelines, though. In fact, he’s never been one to stand on the sideline.

“I became the mailman, and I used to run to town all the time. I didn’t realize what was happening, but we were training for track.”

“At the time I was a pretty good athlete in Track. A track man. One time I did ten flat in the hundred.”

It’s was Herb’s speed on the basketball court that most affected his life. Lots of people recognized his talent. It got him quite a reputation in the Sitka Village. Elders watching him play in high school gave him a new name: Chief See Hands, because his hands seemed to “see” the ball.

Herb played basketball in the early days of the Gold Medal tournament. He played in the Navy, too. Sports allowed him to form a connection with athletes in Sitka and elsewhere who came from different backgrounds. What was missing though, was a connection back to the stories he heard about Tlingit culture.

Off the court, and off the track, Herb challenged himself against his ancestors.

“We missed out on that part of life you know. Gotta be a warrior. If you’re going to be a warrior, you have to follow these rules. These guys were toughened up, you know. I was told these stories. We kind of wanted to go and see what it would be like to have to go through that, you know. We went up Indian River and found a deep hole there. The snow was up to here. And we built a fire on one side of the river, and we walked across to the other side. There’s three of us. We were all going in together. On a one-two-three. One guy was going to bug off, and I grabbed him and pulled him in with me (laughs). When your head hits that cold water it’s like a little melon, you know. And of course, you’re jumping up and down. We had made a whip out of alder branches, and he hit me with it. It left big welts there, and drew a little blood. I immediately grabbed the whip and hit him, and I saw what happened to him. We stopped right there, you know. We said, Whoa, I’m glad we didn’t have to go through that to train.”

That Herb would want to test his limits is a testament to his character. By contemporary standards, his work life was back-breaking. He worked in a sawmill, fish house, and was the straw boss in a cannery. He also crewed Andrew Hope’s seiner for twelve years. Promotion, in those days, meant not setting the heavy seine net by hand.

Herb – I was what they call the skiff man. We had the first power skiff in Sitka. Andrew Hope built that – in two weekends we did that.

Diana – So, before that would you row the seine skiff?

Herb – Yeah. We had to use the oars. At that age I wasn’t that strong, but I could hold the oars out.

Diana – How old were you?

Nowadays, Herb and his wife Paulie, who have been married for fifty-nine years, stick together. Sometimes traveling around the world, sometimes driving around a town they have seen evolve through the years.

Diana Saverin is a Kinglsey Trust Fellow from Yale University. She visited Sitka last summer to interview residents who had participated in a study of the community’s distinctiveness.

The study, by researcher Gary Holthaus, is called “Up for Discussion: What makes a Sustainable Community?” It was published by the Island Institute with support from the Alaska Humanities Forum.