Linda Behnken: Mixing love and advocacy on the ocean 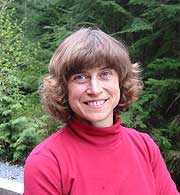 Any study examining Sitka’s distinctiveness absolutely must include a fisherman – fishing has been a mainstay of civilization on Baranof Island, literally since the dawn of civilization.

But not all fishermen are men. In part four of her five-part series of Sitka profiles, reporter Diana Saverin meets Linda Behnken, who is a fisherman, resource advocate, policy planner, and mom.

Like many in Sitka, Linda Behnken finds herself more on her boat than on land during fishing season. She’s a fisherman, among other things.

She came here for the first time when she was in college, and she fell in love on sight. Since then, she’s been committed to this town, and the lifestyle that it offers.

“I guess I first came up to earn money for college. I took the ferry up, and knew by the time I got off the ferry that I wanted to live here. Loved it, the whole place, the fishing community and working on the ocean. The people, that way of life. I just sort of fell in love with it.”

Moving to Sitka to fish wasn’t always the plan though. She was thinking of being a writer while in college at Dartmouth. But Sitka offered something she couldn’t refuse.

“I was going to college and coming up here fishing in the summers. I almost dropped out of college to stay here, but I got talked out of that. Where I grew up was more suburbs. We had neighbors we were close to, but there wasn’t a strong sense of community. The tightness of the fishing community – people are very independent, but when something goes wrong they are all there for each other, and they help each other with projects and whatever. I really liked that.”

Linda stayed in college, eventually earning a Master’s from the Yale School of Forestry. From there, she moved into resource policy, where she’s been ever since.

Linda seemed to pick the toughest battles: The Southeast trawl ban created one of the largest areas without trawlers at the time. And she also helped craft the IFQ management system for the bottom fisheries. This work didn’t always make her popular, but it did preserve a way of life for many fishermen.

“The small boats are usually run by families that live in the coastal communities. For one, it’s an important way of life. We’re still really tied to the ocean and have a connection to wild places that’s really different from the way most people live anymore. They also generally are real advocates for healthy, sustainable oceans and fisheries because they want to have something to hand down to their children.”

Fishing is grueling work; so is advocacy, even though it doesn’t leave evidence on her calloused hands. There’s always a new issue. Declining quota, bycatch, reconciling differences with the charter sector – even sperm whales, who’ve figured out that cod and halibut caught on longlines make a tasty treat.

Linda thinks about a quieter life, but so far doesn’t have an exit strategy.

“I tried to quit a couple of times, but they wouldn’t let me. For years – pretty much the whole time I’ve been running ALFA – there’s never been enough money to pay much of a salary. So, it’s more doing it because it’s stuff I really care about. So, it’s hard to replace someone who’ll work real hard for almost no money. I think our association’s been real effective, and when you’re effective, people don’t want you to quit.”

And Linda has a third full time job: She’s the mother of two boys, Halen and Rio, who are seven and nine. As she works to preserve the lifestyle of small family fishermen on a larger scale, she’s adapting a lifestyle of her own to make her many jobs work in synergy.

“The way the quota share program was written, you have to be there when your quota’s being caught. They were nursing – sequentially – so, they had to go along. I fished one 4-5 day halibut trip when Halen was a year-and-a-half and I was pregnant. I think I was eight months – and that one about killed me! I just remember being exhausted. The first time around being pregnant, I was deathly seasick, so I quit crewing and was just fishing my own boat for the rest of the time I was pregnant. That was enough. I wouldn’t recommend it. I remember thinking, What did I ever think was hard about fishing before I had kids? It just seems like it would be so easy. It’s a lot easier now.”

Diana Saverin is a Kinglsey Trust Fellow from Yale University. She visited Sitka last summer to interview residents who had participated in a study of the community’s distinctiveness.

The study, by researcher Gary Holthaus, is called “Up for Discussion: What makes a Sustainable Community?” It was published by the Island Institute with support from the Alaska Humanities Forum.