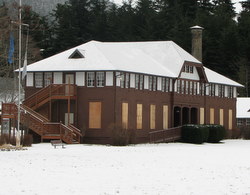 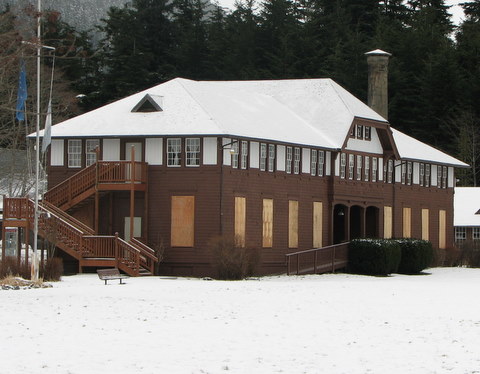 Late last month we brought you profiles of four Sitkans who participated in a study of the community’s distinctiveness.

The fifth-and-final profile in this series is not of an individual, but of a place: the Sheldon Jackson campus.

Reporter Diana Saverin is a Kinglsey Trust Fellow from Yale University. In addition to interviewing Sitkans, Saverin spent a part of last summer trying to understand what’s happening at Sheldon Jackson — both from the perspective of the people who made the school one of the state’s most important educational institutions for Alaska Natives, and from the perspective of those who are building a new future on the site.

This story has two parts: Part one today begins about a year ago, when the historic Sheldon Jackson campus was still boarded up, with a very uncertain future.

For Sitkans like Roger Schmidt, the old Sheldon Jackson campus was difficult to ignore.

“It’s right downtown. And I think most of us who live here think Sitka’s gorgeous. It’s why I live in Sitka. Because it’s beautiful – beyond superficially beautiful, but like a spiritually beautiful place here. And Sheldon Jackson’s right there, right at the edge of our downtown, and it’s gorgeous. But there’s nothing gorgeous about full sheets of plywood covering every window. How could that be? We’re not a community that’s failing, and yet it just kept saying, You’re failing.”

The clump of empty buildings with broken windows and plywood evokes images of deserted industrial buildings, almost looking like old car factories in Detroit. But these buildings were nestled between snow-capped mountains and a full harbor, near the center of this town of 9,000 people. Instead of quaint and communal, like the rest of Sitka, the space lay hollow and unused for four years.

“I went to school there from my seventh-grade year through high school.”

Such hollowness defies over a century of rich history. Isabella Brady is a Sitkan who went to Sheldon Jackson in the 1940s.

“And as I talk to the graduates of SJ they, all give credit to where they are in life today (to Sheldon Jackson).”

When the buildings above Lincoln Street emptied out four years ago, the idea and legacy of SJ remained strong, and continues to remain strong for many.

SJ is the oldest educational institution in Alaska. It was founded in 1878 as a training school for boys, just eleven years after the purchase of Alaska. It eventually added a high school in 1917, and a college in 1944.

At the time, and through the middle of the twentieth century, Alaska Natives could not attend public schools in Sitka. After going through the Bureau of Indian Affairs elementary school, Alaska Native students could enroll to board at Sheldon Jackson Institute, a Presbyterian mission school, beginning in the seventh grade.

“They taught us manners. It was interesting. It was all very disciplined. It was kind of like a melting pot for us, because we got to know each other. We formed friendships from around Southeast. I believe you’ll find if you talk to the ones who went there and had nowhere else to go, are all very dedicated to the school.”

For a generation of former students in Sitka and around the state, it’s a place full of memories. The gym at Sheldon Jackson is named for Herb Didrickson, who also built a life here.

“The building on the right held seventh, eighth, and freshmen. They were the small boys.”

In the seventies, SJ began to suffer from financial troubles. Surviving as a small liberal arts college is not easy, as the plight of other similar institutions can attest. Its nearest competitor, the Wrangell Institute, closed down in 1978. Cost of operations went up, and enrollment went down.

In the seventies, SJ also nearly closed. An ad appeared in the Sitka Sentinel: Sheldon Jackson Must Not Die! And it didn’t. A donor from San Francisco, Jane Newhall, saved it with a $700,000 donation.

Since its rescuing in 1980, it’s struggled to stay afloat. And four years ago, in June of 2007, with several million dollars of debt, the college was in need of an eleventh-hour donation yet again.

The college petitioned the city for a $1-million loan. John Holst served on the assembly at the time.

“We had voted to do a loan, and that they could make a request for the money. And when the request came, it was denied. And so the upshot of that was that the money was not available. There were personalities involved, decisions that were made for the wrong reason, I think. Not for the best of Sitka or for the campus. That was not the cause of the closure of the campus, but it was the last straw probably.”