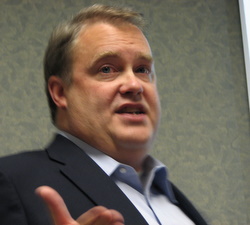 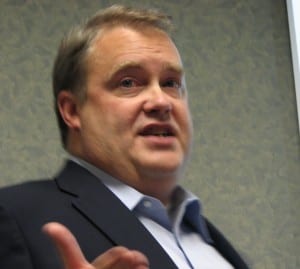 The Parnell administration is taking its pitch to reform the state’s oil tax structure on the road.

The Sitka Chamber of Commerce received a cabinet-level visit on Wednesday (1-11-12). Bryan Butcher, the Commissioner of the Department of Revenue, and his deputy, Bruce Tangeman, narrowly escaped being snowed-under in Kodiak in order to make the trip, but still had to wait out a two-hour layover – in Juneau, of all places. Butcher said it was “double-treat” to be in Sitka, and not weathered-in “with the majority caucus.”

Although Butcher said he would willingly take questions about the permanent fund, or pensions, he concentrated his program on House Bill 110, which would roll back some of oil taxes the state receives under the current regime known as ACES, or “Alaska’s Clear and Equitable Share.”

ACES was passed during the Palin administration, when oil prices were in the $50-60 per barrel range.

Butcher argued that lawmakers in 2007 could not have anticipated that prices would double in so short a time. The state has been salting away surpluses of roughly $2-billion a year since ACES became law, but Butcher said that the high taxes were stifling development on the North Slope, and that oil companies were investing more elsewhere.

“And what are we seeing? We’re seeing the record-high oil prices leading to booms in North Dakota, in Texas, Alberta, Saskatchewan – any country you can think of, and nothing seems to be going on in Alaska. To give you an example, we’ve got a few more exploratory wells going on this winter. Last winter, we had one exploratory well in Alaska. There were hundreds in North Dakota, hundreds in Texas, hundreds in Alberta. Everywhere looking at the price of oil and what could be done, what could be economic, but it just hasn’t been going on in Alaska.”

ACES returns up to 40-percent of a company’s exploration costs in the form of tax credits. Butcher said this was a good aspect of the current law. However, the companies doing the exploring are typically not the same companies who ultimately develop a field and move oil to market. The high taxes under ACES, Butcher argued, were keeping Alaska’s huge oil reserves in the ground.

This was not the first time the Sitka Chamber has heard a pitch for HB 110. Former university president Mark Hamilton was in town last year for the same purpose. Although few would argue with the need to keep the Alaskan oil industry – and the state’s finances — healthy, rolling back taxes continues to be a difficult sell, especially in Southeast.

“It’s obviously increased the revenue coming into Alaska – and what’s happened to it? $2.5 billion dollars went into our savings account this last year. $40-million in capital projects – that put a lot of people to work – came to Sitka. Putting Sitkans to work, providing tax income, putting people into rental units. It’s having an impact here. Your proposal’s going to take $2-billion a year off the table, give it to the oil companies. It’s going to impact us here dramatically. We don’t have the oil worker jobs – that bothers me. The thing that I’m most concerned about is that HB 110 has no requirements to say to those oil companies, Are you going to reinvest in Alaska? Nothing.”

Audience member Eric Jordan asked how long it would take for Alaska to recover the lost tax revenues, once oil production was reinvigorated on the North Slope. Butcher responded that ultimately, it depended on prices.

Jordan, who like all fisherman, has seen a sharp increase in his business overhead as a result of high fuel prices, was not satisfied. He called HB 110 a gamble, and preferred the status quo.

“Oil companies around the world are going to want Alaskan oil at these tax rates, and you haven’t convinced me otherwise.”

Butcher responded that as long as there was more money to be made elsewhere, that was where oil producers would go. He thought HB 110 would allow the state to find a “sweet spot” in its tax rate that would help Alaskan oil to remain competitive.

“Obviously, we don’t pretend that HB 110 is the perfect tax bill. There’s no such thing. This is our best shot. We’re going to sit in the committee process and work through things like this. The one thing that the governor believes without question is that if our marginal tax rate takes 92 cents of every dollar at the current price of oil – that’s too much. If we’re taking well over 50 percent of everything produced on the North Slope, and then the feds take some, and the rest goes to the industry, that’s too much.”

HB 110 passed the state House of Representatives 22 to 16 last March. It was introduced in the senate in April, too late in the session for final consideration of the bill. HB 110 will be in the senate Labor and Commerce Committee when the legislature convenes on January 17.