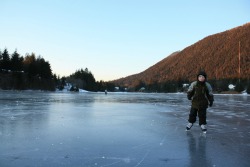 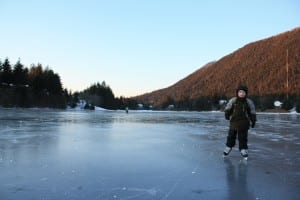 Cold weather is no match for ice skaters at Swan Lake. Sitka was in single digits Monday and Tuesday, and temperatures are expected to climb into the weekend. (KCAW photo/Ed Ronco)

Sitka fire officials are urging residents to play it safe as a cold snap continues on Baranof Island.

Temperatures were in the single digits for the second day in a row Tuesday. National Weather Service meteorologist Ricky Lam says Sitka hit a low of 6 degrees overnight Monday into Tuesday. Windchills have reached -2.

Lam says the average low this time of year is 32 degrees.

Sitka Fire Chief Dave Miller said Tuesday morning that his department had responded to a couple slip-and-fall accidents. The department also received reports of five or six buildings with frozen pipes. Most of those have been commercial buildings with sprinkler systems. The worst case scenario is that the frozen pipes crack, and release the water inside.

“And it’s a big ugly mess,” Miller said. “Generally, the water in the pipes is dirty because there’s rust and stuff in those pipes. They don’t get used all the time. Generally when the water comes out the first 200 gallons is real ugly, and stains a lot of stuff.”

“Usually they freeze up during a cold spell and next week, when they start thawing, is generally when we see most of the pipe problems,” he said.

The American Red Cross recommends keeping a trickle of water running through faucets to help prevent frozen pipes. If you need to warm up a pipe, the Red Cross recommends a blow-dryer or heating pad. They say never to use a blow torch, open flame, or kerosene or propane heater.

Temperatures are expected to rise into the 20s on Wednesday and Thursday. Forecasters are predicting snow Friday night that could change to rain as temperatures continue warming up into the weekend.

The cold snap isn’t all bad news, at least not if you’ve been waiting for Swan Lake to freeze. The Sitka Fire Department reported 5 inches of ice on the lake as of midday Tuesday.