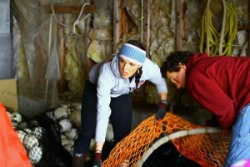 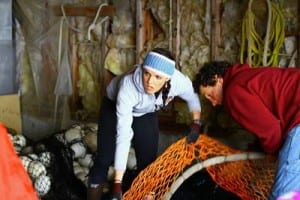 Sierra Anderson and her father, Dean, work on a net. The family was featured on "Hook, Line and Sisters," which TLC has pulled from the air. (Photo: TLC)

A reality television show filmed during Sitka’s herring fishery has been pulled off the air.

The TLC network first aired “Hook, Line and Sisters” on Dec. 29. The show follows the Anderson family as they participate in Alaska fisheries aboard their vessel the Memry Anne. Much of it was filmed during last year’s Sitka Sound sac roe herring fishery.

Sierra Anderson, one of the sisters mentioned in the title, said she could not give an interview about why the show was canceled, per TLC’s policy, and that the future of the show is still uncertain.

But on her public website, she says she got a phone call on Jan. 6 telling her TLC had pulled the plug on the show. The cable network had originally planned to air seven episodes of the program. Anderson says there weren’t enough views to keep it profitable.

“I know that what I had was a great show and I don’t take any of it personally,” Anderson wrote on her website. “I still have hope that something good comes of this.”

TLC is one of several channels owned by Maryland-based Discovery Communications.