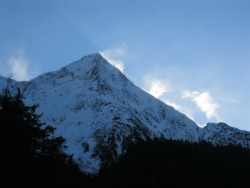 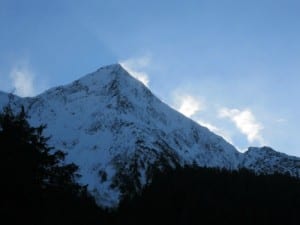 Sitka Mountain Rescue is urging anyone on slopes around Sitka to use extra caution this weekend.

The volunteer rescue team issued an avalanche advisory this afternoon. Mountain Rescue Capt. Don Kluting says the advisory comes from extreme cold in the last few days coupled with high winds in the forecast for the weekend. He says slopes facing southwest and northwest are of particular concern.

Dry, unstable snow is being blown onto those faces, and Kluting says they’ve already seen some avalanche activity.

“There was a pretty significant slide that came down off of Bear Mountain in the last 24 hours and it actually deposited snow across Green Lake Road,” Kluting said. “The powder blast actually went through and out into salt water.”

“We’re certainly not saying that they shouldn’t go out. But we’re saying if they do go out we want them to be aware that there’s some slope aspects that could be particularly hazardous,” he said. “If they’re going to be snowboarding or snow machining on those slopes that they should be taking all the precautions – digging snow pits and evaluating it before they throw themselves out there.”

Kluting says anyone heading into the back country should take avalanche transceivers, probes and shovels. He also urges hikers to follow basic safety tips, such as not hiking alone, and telling someone back in town where you’re going and how long you’ll be out.

You can link to Sitka Mountain Rescue’s Facebook page for more information.