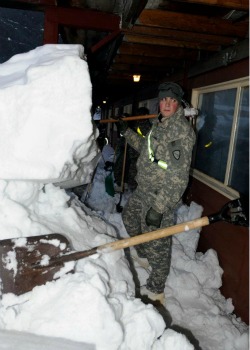 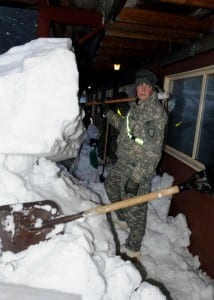 Pfc. Charles Rusk, 24, is serving with the Alaska National Guard. The Sitka resident is part of the 297th MP Co., which helped residents in Cordova dig out from more than 18 feet of snow earlier this month. (Photo by Spc. Balinda O'Neal)

Life is slowly returning to normal in the community of Cordova after more than 18 feet of snowfall brought the town to a standstill earlier this month. The Alaska National Guard was activated to help the town dig out.

One of its members, 24-year-old Pfc. Charles Rusk, is from Sitka.

Rusk says his unit, the Wasilla-based 297th Military Police company, was conducting a training exercise at Fort Richardson in Anchorage on Jan. 7 when they got news they might have to activate.

“The Wasilla team was loading up the Humvees and were ready to drive back to Wasilla to get in our cars and go home, when they told us to stop,” he said.

Rusk and the others were told they had to return to the fort in the morning, to be bused to Whittier, loaded onto the state ferry Fairweather, and transported to Cordova.

Rusk says they received a warm welcome from some of the city’s 2,200 residents.

“They were cheering us when we came in. A lot of people were taking pictures,” he said. “They would stop on the side of the road to thank us. People came in and shook our hand. On the last day, some people just came in and gave everybody hugs. It was a lot of outpouring and a lot of support from the city.”

When they arrived, some of the buildings had already collapsed, and others were in danger. Rusk says soldiers went to work on two schools, a couple of canneries, and an apartment building.

“Sitka doesn’t get a lot of snow, obviously. People in Sitka know that. But a lot of folks around the state don’t realize that,” he said. “So when we did get to Cordova, I told them ‘Oh, yeah, I’m from Sitka normally,’ and they’re like, ‘Oh, good. At least you know something about removing snow.’ I had to bite my tongue a little bit. Yeah, not really.”

But what does 18 feet of snow actually look like?

“It looks white,” he said. “In a lot of places it was over our head. I’m 6-foot-3, and it was kind of interesting having stuff taller than you being all around.”

Rusk says members of his company estimated removing more than 250,000 pounds of snow in the eight days they spent in Cordova, where local crews had already been working for days to keep up with the problem. Plows and heavy machines worked in 12 hour shifts, 24 hours a day.

And just as the residents of Cordova were happy to see the National Guard, Rusk says his company was grateful for everyone’s effort, and the hospitality they received in Cordova.

“The people of Cordova were incredibly helpful. They were really nice toward us,” Rusk said. “They fed us incredibly well. I think I actually gained weight while I was doing all that work. They baked us cakes for the last day, they wouldn’t stop giving us brownies, cookies, things of that nature. The people of Cordova made it all worthwhile.”

Rusk says in addition to the hard work of residents, his company was also thankful for the help the town received from the crew of the U.S. Coast Guard Cutter Sycamore. And he says he hopes to return to Cordova, but next time, under better circumstances.