Sitkans give, get help at homelessness event 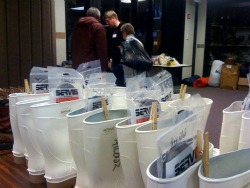 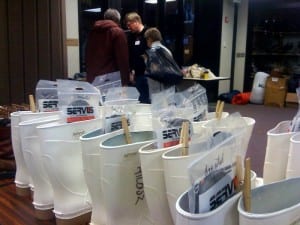 Volunteers help a visitor select items from among the donations at Project Homeless Connect. The Wednesday event served 45 people who are homeless or in danger of becoming homeless. (KCAW photo/Ed Ronco)

The hallways at Sitka’s Harrigan Centennial Hall are busy with foot traffic, all of the building’s rooms are open, and everywhere you look, volunteers are moving about wearing nametags on red strings around their neck.

This is “Project Homeless Connect,” an event geared toward helping people who are homeless, or at risk of becoming homeless, connect with the services and supplies they might need. It’s put on in Sitka by the Easter Group.

“A lot of people love coming to Sitka, thinking it’s a land of milk and honey,” said Salvation Army Major Evadne Wright. “You know, it’s a beautiful place. I love Sitka. But it’s just the fact that I think people come and don’t realize the cost of finding a house. The jobs aren’t as available because anybody who lives here keeps their job. So it’s not something that has a big job opportunity unless you know somebody or you are a fisherperson.”

Wright says events like this connect people to the services they need, but also connect the service providers to each other.

“We don’t get together enough to know what other people provide, and this morning, I’ve been able to meet faces I’ve spoken to on the phone, and put a connection (to them),” she said.

The exhibit rooms at Centennial Hall have been turned into a store of sorts – cashless, the organizers say. There are tables full of boots and shoes and blankets. There are racks with coats and fleece vests on them. Shirts are against the wall. There’s underwear, personal hygiene products – anything you could need.

And most of these products were donated, says Dorrie Farrell, one of the organizers of the event.

Farrell says just as she’s been amazed by the donations and by the event’s ability to connect so many people to so many services, she also acknowledges that there are some disconnects. Many Sitkans aren’t aware of the city’s homeless population.

“Because you don’t move in the same circles,” Farrell said. “You’re not in the same spot as homeless people are. So naturally there’s some bitterness on their part, and anger, toward we who are warm and well-clothed and well-fed.”

But hard feelings are hard to find in this building, on this day. Standing in the store for a moment or two, you hear people say they don’t need two of a particular item, just one. Those who have come to eat the lunch have also offered to serve it. There are serious things going on, serious conversations with people who need help and those who can offer it, but there’s also a lot of laughter.

Tracy Shaffer is leaving Centennial Hall with a couple bags of supplies. He’s walking with a little spring in his step, and offers a greeting as he passes. Shaffer describes himself as “nearly homeless.” He came down for a funeral. His wife returned to Anchorage and he stayed for work.

“I know enough people, I can find odd jobs,” he says. “So I’m staying until I can’t find anymore. But basically, the way things are going I might be here for a while. It’s harder to get a job in Anchorage. And if you do, without transportation it’s tough. And there’s a lot of stuff you’ve got to go through – a lot of red tape and a lot of people who are unemployed.”

Shaffer says if the community works together it can make a serious dent in homelessness. He says he hopes Sitka keeps providing opportunities for work, and he notes there’s no shelter here for men.

That often means families who are homeless find themselves separated at night. Families like Richard Lang and Stephanie Smith.

Lang is living in his truck with his two German shepherds while Smith and their 4-month-old son, Tayler, stay at the Sitkans Against Family Violence shelter. The shelter often takes in women and children who are homeless, regardless of whether they’ve been in a violent situation.

It’s not known exactly how many people in Sitka are homeless. This event served as a census of sorts, and counted 45 people. But Mim McConnell, one of the Easter Group organizers, says there are plenty who didn’t show up today, who aren’t being counted, including teenagers who couch surf.

And there are plenty of people who are at risk of becoming homeless. McConnell says last Christmas, about 75 families signed up for help from the Salvation Army. This year the number nearly doubled.

“Just from the Salvation Army numbers, we know that more people are at risk of being homeless,” McConnell says. “But we don’t necessarily know who they are. And it would be good to help them now, before they become homeless.”

McConnell is also on the Sitka Assembly, and has been a vocal advocate for more affordable housing options in Sitka. She says homelessness can happen to almost anyone, very quickly.

“I haven’t been homeless, but I’ve definitely had needs I couldn’t address,” she said. “I needed to get agency help. I know what that’s like.”

McConnell says she hopes the community have a conversation about longer-term solutions that would do away with the need for events like this. Until then, she says Project Homeless Connect will happen again, and hopefully word of mouth from those in attendance this time will help them reach more people in the future.