Halibut Point Road fixes could wrap up next week 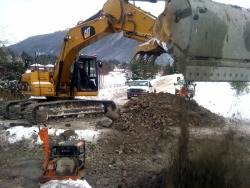 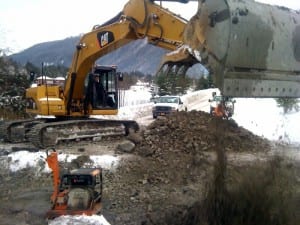 Crews use heavy equipment to begin resurfacing Halibut Point Road near the foot of New Archangel Drive. The road was damaged when a valve housing blew apart, releasing 400,000 gallons of water in about an hour's time. (KCAW photo/Ed Ronco)

It could be late next week before a section of Halibut Point Road near downtown Sitka re-opens to traffic.

Crews continued working today to clean up the aftermath of a water valve that burst on Monday. Officials say the accident wasn’t caused by Sitka’s unusually cold weather, but it wasn’t helped by it either.

It’s been a snowy few days along Halibut Point Road between Marine and Erler streets. That’s where traffic has been diverted from this, Sitka’s main artery into town from the north.

A crew near Marine Street is smoothing concrete on a square patch of road. And down the hill a little bit, near the foot of New Archangel Street, two backhoes are moving giant chips of asphalt from a tremendous gash in the road.

“You know, every morning, you’ve got snow to get out of the ditch and stuff, before you can backfill,” said Mark Buggins, the environmental supervisor in Sitka’s Public Works department. “You’ve got snow just to remove from the jobsite so you can move around.”

It was a drinking water line that had the problem. An 8-inch valve blew apart. The culprits were steel alloy bolts that had corroded and weakened.

The valve blew after a period of cold weather and the resulting thaw. Buggins says it wasn’t the cold weather that caused the accident, but it sure made it worse. Normally, something like this would blow water straight up through the concrete, resulting in a somewhat isolated hole.

“But with the road all frozen, 30 inches or so, it hit the bottom of that frozen road and then went downhill and went both directions,” Buggins said. “So after we fixed our valve, we had to then chase where the water filled under the road and made voids, and then refill that and essentially re-build the road.”

Buggins says crews from the city’s public works department and from Johnson Concrete have been working 12 to 13 hour days for the last week to make the repairs. Buggins says typically there are two or three leaks in a year, but that he’s never seen anything like this. Still, it could have been worse.

“It worked out well, in a sense, because most of it went over into the lake and didn’t wash a house away or something,” he said. “That was a tremendous amount of water in a very short time. It was about 400,000 gallons in an hour.”

Buggins says about seven houses in the surrounding neighborhood were without water for a day, and were under a boil-water notice until tests came back showing the water was safe.

City crews have been busy this winter. A water main burst on Smith Street a couple weeks ago, and there was another leak behind Sitka Community Hospital that crews had to address in a hurry.

Let’s go back for a minute to the culprit behind the HPR closure. Buggins said it was the bolts on the valve housing that corroded, which let the housing burst. They were made in the 1990s out of a steel alloy and, as it turns out, they’ve been causing problems for the cities that have used them.

The valves that failed are different — an alloy of steel.

Buggins says Sitka’s water system has more bolts like the ones that failed, and that his team will find out where they are. It doesn’t mean they’ll all need to be replaced. Buggins says the bolts’ risk of failure is determined by the soil around it, as well as stray electric current.

For now though, crews are focused on fixing Halibut Point Road. Once they pour concrete it will need three days to set before the road can be re-opened to traffic.