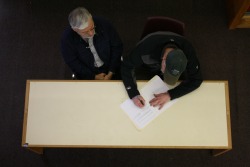 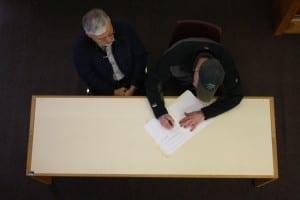 John Holst (left), representing the Sheldon Jackson College trustees, and Bob Banghart, chief curator of the state museums, sign a document giving the former college's archives to the State Division of Libraries, Archives and Museums. The SJ archive includes everything from student records to a mammoth tusk found in Kotzebue Bay and presented as a gift to the college. (KCAW photo/Ed Ronco)

The archives of Sheldon Jackson College in Sitka are now in the hands of the state.

When the college closed in 2007 the Board of Trustees worked to pay down its debt and divest itself of the campus. But lately, the board’s work has centered on preserving the historic school’s legacy.

Under a deal signed Tuesday, the state’s Division of Libraries, Archives and Museums will take control of thousands of pieces of material once belonging to Sheldon Jackson College – everything from historic documents to a mammoth tusk presented to the college as a gift.

Stratton Library is nearly empty. Discolored rectangles of carpet sit where the bookshelves used to. There’s a musty smell, like the doors haven’t been opened in a while. But up on the second floor, tucked away in a back room and covered under plastic, are treasures from a century of Alaska history.

John Holst works for the Board of Trustees of Sheldon Jackson College. The items in this room go far beyond student records, and range from the clearly historical, like the desk used by Sheldon Jackson himself, to the completely unexpected. 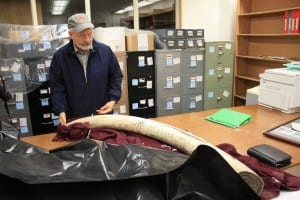 John Holst handles a mammoth tusk discovered near Kotzebue and gifted to Sheldon Jackson College. It's one of thousands of pieces of the former college's archives, which are now owned by the State of Alaska. (KCAW photo/Ed Ronco)

There are portraits of school luminaries, and tributes to school sports stars, like a plaque Holst finds listing off the school’s basketball hall of fame. 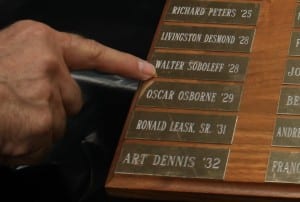 John Holst points to Walter Soboleff's name on a plaque honoring the Sheldon Jackson High School Basketball Hall of Fame. Soboleff, who graduated from Sheldon Jackson H.S. in 1928, went on to become an acclaimed and respected Tlingit elder before his death last year at age 102.

“Walter Soboleff,” Holst says, pointing to the plaque. “He was in high school in 1928.”

Soboleff became a respected Tlingit elder and spiritual leader before his death last year at age 102.

The room is so full that a rough inventory completed this past summer takes up 220 pages. And that’s just what’s here. Within six months of the college closing, many of its records were sent to Juneau for safekeeping. They, and the pieces that remain on campus, will eventually all be housed in Sitka.

Banghart says the list of what’s in the room is exhaustive, but state archivists will still have to take a look at the items to get more specific information and figure out how each fits into the history of the college.

“To be honest, when you start delving into it, maybe 10 percent actually has focus,” Banghart said. “And then there’s 90 percent that’s like, ‘I’m not sure, but I know this is important.’ You feel it.”

Sitka residents have been involved in the process throughout, say Holst and Banghart. At a public meeting last year, some 40 people weighed in on what to do with the archives. From that group came a committee of five, called the Sheldon Jackson Legacy Committee. Holst says they unanimously endorsed turning the archives over to the state.

The acquisition of the archives is another step forward in linking Stratton Library to the neighboring Sheldon Jackson Museum. The state purchased Stratton in 2010, for about $2 million. Banghart says the second floor of the library will be turned into a storage vault for the materials, to ensure they’re preserved.

He projects at least five years before that project is complete. The building, he says, needs some work.

“It’s a building built in 1974,” he said. “There’s no insulation in the walls. It’s a single-glazed window structure. When we did have the heat on, I’m looking at the oil bill going, ‘I can’t sustain this.’”

The state will pay for architects and engineers to come up with a way to improve Stratton and make it sustainable. Banghart says Stratton itself will eventually become an expanded collection space for the neighboring Sheldon Jackson Museum, which will also encompass the archival material.

And he says having Stratton Library as part of the state’s museum system will allow museum officials to experiment on a small scale here with ideas that maybe can be used across the entire system. He says it’s possible that the combined Sheldon Jackson Museum and Stratton Library could even host a curator training program of some sort.

Holst says that notion, that this could be more than just an archive, is what appealed to the trustees.

“They saw this as economic development, basically,” he said. “Bringing programs here to Sitka that don’t exist anywhere else – those are things that are very good for this community and for this building and the campus.” 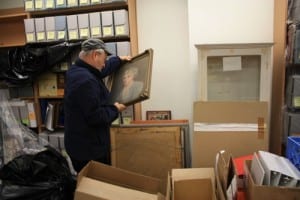 John Holst looks at a portrait of Fannie Kellogg, one of thousands of pieces in the former college's archives. The archives are now under state control, and will be made available to the public. At right, and behind a piece of cardboard, is a medicine cabinet from the school nurse's office, which Holst describes as the oldest piece of furniture in the archive.

As for the archives themselves, Holst says there are some items that will be preserved but not made public right away – minutes of private Board of Trustees meetings, for example. Other items, like personnel files and employment papers bearing Social Security numbers, have been destroyed, in keeping with standard practice.

State archivists will have a lot of material to sift through, and a long history to learn. Banghart says there will be discoveries along the way, including some that might even be personal.

“I taught here in ’75,” Banghart says. “That summer, I taught at the Fine Arts Camp. I was kind of looking at some of the stuff from that period saying, ‘I bet I’m in some of those pictures.’ That’s the best part of this business – what’s not apparent until you really start digging in.”