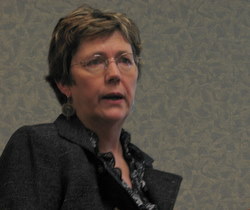 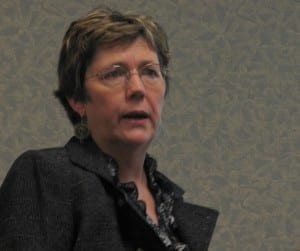 Alaska’s legislative information system may be the most transparent in the nation.

Sue Cotter, statewide director for the legislative information office, believes that there’s no comparable, non-partisan agency anywhere in the country.

Cotter spoke to the Sitka Chamber of Commerce on Wednesday (2-8-12). When an audience member asked if other states had similar systems, she replied, “We’re unique.”

Cotter credited the success of the LIO to foresight, and to bipartisanship.

“We can all be really proud of this: In 1976 the Legislative Council, which is the group of legislators that oversees our agency, came up with this idea of setting up this non-partisan set of offices around the state. It first started out with Juneau, Fairbanks, Ketchikan, and Anchorage. And they kept adding more LIO’s around the state. Some are only open half the year, others all year long. It was a terrific thing to do. They recognized the geographical difficulties in the state. They wanted to use as much technology as they could. They’ve been very supportive of our offices over the years. When I go to national conferences, people are just blown away. To answer your question, there’s no other state that does it like this.”

There are now legislative information offices in twenty-two Alaskan communities. Cotter said the only equivalent types of services offered in other states were operated by political parties.

What the LIO does exactly can be hard to pin down. It maintains a legislative directory, including all committees; it tracks all bills from the moment they are submitted until they are signed by the governor. It keeps a library of legislative publications, everything from the state constitution to the house and senate uniform rules.

The LIO has all this information available online, and also streams live video from all committee and floor sessions. Any member of the public outside of Juneau who wants to testify in real time at a committee hearing does it at a local LIO. The LIO also assists people in sending a public opinion message to any legislator.

If anything, though, Cotter assured the Sitka Chamber that the LIO was there to demystify the legislative process.

“Anybody can have an idea for a bill and pitch it to their legislators, or to the governor. The governor is allowed to introduce bills through the legislature – he or she has to go through the Rules Committee — but the governor’s allowed to introduce bills as well. Individual legislators, groups, or committees can introduce bills, but the idea can come from anybody. It can come from a group of business people here in Sitka, it can come from individuals, or a group of students. We actually had a bill go through a couple of years ago from a Civics class. It was a somewhat innocuous bill – naming the state insect or something – anyway, it was a really good learning experience for the kids.

Cotter then displayed an LIO web page detailing every official action taken for a sample bill as it moves through both chambers of the legislature: How it is assigned to various committees, the committee action, the amendment process, the final floor vote, and finally, its transmittal to the governor for his signature.

The list of official action for any one bill is surprisingly long. An audience member asked Cotter if the shorter, ninety-day session allowed the legislature enough time to work.

Cotter thought for a moment and said, “I’d better not opine on that.”