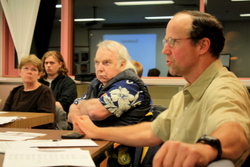 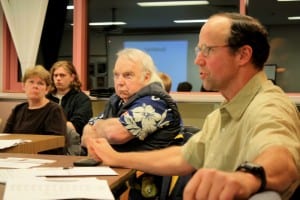 The Sitka Assembly and the Sitka School Board met last night in a work session to discuss the school district’s budget.

Last year, the city gave about $5 million to the schools. That amount has been declining since 2010. With budget times tight this year, the school district is not counting on an increase.

The district faces a nearly $1.3 million deficit. The school board’s commitment of a half-million dollars from reserves has already pared that down. But that still leaves nearly $800,000 to cut.

School Board president Lon Garrison gave Assembly members an overview of the district’s budget, and told them that Sitka’s situation is far from unique.

“We are right there with everybody else,” Garrison said. “Nearly every district across the state is facing a 7 to 10 percent deficit in their operating budget. Anchorage just cut $20 million out of their school budget. They’re laying off nearly 100 people out of their district.”

Sitka hopes to avoid layoffs, especially from classroom positions. Parents and teachers have said they want to keep Sitka’s historically low class sizes. Whether the district can do that will depend on outside funding sources. Garrison is just back from meetings with lawmakers in both Washington D.C. and Juneau. He says federal funding is up for renewal, but the odds are long that it’ll happen.

A bill to increase state funding is expected to have clear sailing in the Senate, but Garrison says the House is less certain. Assembly member Mim McConnell wanted to know more about the House.

McConnell: “I mean, do they get it at all? Are there enough of them that get it?”
Garrison: “A lot of them get it. How many on the House Finance Committee get it is yet to be seen. I think if the House was allowed to just vote its conscience it would pass. The problem is that I think part of this is going to be played to the endgame to see what happens with oil and gas tax reform, and we’re going to be held hostage to that to some degree.”

In other words, what the state House does with oil and gas taxes will determine how much money it feels able to give to the school districts.

The timing issue has long plagued the school district’s budget process. By law, its budget must be set in stone, and its teacher contracts must be renewed before it knows for sure what level of funding it will receive for the upcoming year.

Thor Christianson wanted to explore the possibility that the district’s numbers turn out better than expected. He said he was just “thinking out loud,” but that the city could perhaps work out a deal where it promises money if the school district finds itself in trouble.

“We could even do it where we don’t even give you the money,” he said. “We could just pledge it, and say, if you really need it by the end of the year, it’s here.”

After some brief discussion about that idea, Mayor Cheryl Westover said she wasn’t comfortable talking about a specific plan outside of a regular Assembly meeting.

Thursday night’s meeting between school and city officials was intended strictly as an informational session. Nobody left the room with any concrete plans. The school district’s budget process continues with a work session March 8. The city begins budgeting later in the spring.

Have an idea on the budget? Tell it to the Sitka School Board or Assembly.