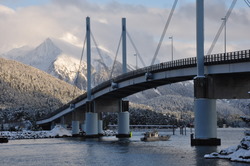 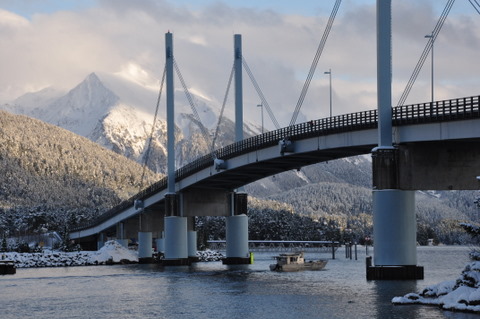 Seas on the Fairweather grounds were as high as Sitka's O'Connell Bridge. (Photo by Berett Wilber)

A walk through any forest trail around Sitka – or probably anywhere in Southeast for that matter – will reveal that this has been a windy winter. Broken branches and toppled trees are just about everywhere.

The same winds wreaking havoc on land are also a problem at sea. The state ferry Kennicott postponed a scheduled cross-gulf voyage earlier in February due to heavy weather.

Built in 1998, the Kennicott is one of the state’s newer ships. It is 385 feet long – or about one-and-a-third football fields. The Kennicott and the Tustumena are the ferry system’s two ships rated for open-ocean travel.

What kind of weather could keep it tied to the dock?

On Friday, February 3, Sitka experienced sustained winds of 53 miles per hour throughout much of the morning, and recorded a peak gust of 86 miles per hour.

Meteorologist Joel Curtis, with the National Weather Service in Juneau, says he and his colleagues have been analyzing data from the Cape Fairweather data buoy.

Curtis — Forty-eight feet, and if you want to put decimals on it, forty-eight-point-six.
KCAW – Yeah, with decimals. Like, you’re out there with a meter stick.
Curtis – That’s absolutely insane. Why don’t we say very close to fifty feet.
KCAW – No ship is going to weather it particularly well?
Curtis – No ship is going to weather it well. There’s nothing on the ocean that is going to have a good day in a fifty-foot sea – And oh, by the way, the period was seventeen seconds. That means you get hit by a fifty-foot wave every seventeen seconds.
KCAW – Wow. I’m looking out at the O’Connell Bridge right now, and I’m guessing that it’s about fifty feet high.
Curtis – I think that’s just about right for the bridge, man.
KCAW – Wow. It would be…
Curtis – Mountainous. “Mountainous” is the word.

For the record, the reported clearance under the O’Connell Bridge is 53 feet, depending on the tide.

You can check out the wave data from the Fairweather Buoy yourself.Bear in mind that the buoy data will be given in meters.