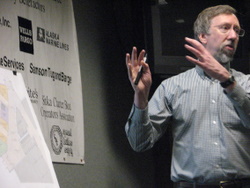 Planning for the expansion of the Sitka Historical Museum has moved from talk to floor plans.

Museum director Bob Medinger displayed two options for a 6,000 square-foot addition to Harrigan Centennial Hall for the Sitka Chamber of Commerce on Wednesday (2-29-12).

Strictly speaking, the museum is in the “pre-development” phase. Last year the historical society and the Foraker group partnered in a $47,000 grant from the Rasmuson Foundation to convene a planning committee, to hire a museum consultant to assess the operational needs of the facility, and to hire an architect to develop preliminary floor plans.

The proposed addition would move the museum to the other side of Harrigan Centennial Hall from its present location, and create a new entrance to the building facing the visitor dock.

The new museum will be integrated into the overall pedestrian and traffic improvements planned for the centennial building area.

Medinger envisioned both permanent and temporary exhibit space, common in the museum world.

“Currently, we can’t get the travelling exhibits that go around the state for a couple of reasons. One, security, environmental controls, etc., such that we get the offers, and get (the exhibits). If we can get them, we have to take up a room in Centennial Hall. Normally, they come for three or four weeks, and Don (Kluting) is hesitant to give us more than a week because of conferences, or something else.”

Architect Paul Voelckers, of Juneau, described the basic layout and function of the proposed museum’s exhibit spaces, storage, and offices. At 6,000 square feet, the new museum space would occupy slightly less space than it does now – though it is currently divided among three locations: Harrigan, the so-called “White House” on Seward St., and Sawmill Cove Industrial Park.

An audience member was concerned that the proposed museum addition’s appearance would conflict with Harrigan Centennial Hall, which has a distinctive look. Voelckers responded that upgrades to the museum would likely benefit Harrigan.

“I think it should be friendly,” Voelckers said, “and tie in gracefully – but not be an exact replication of it. Who knows? When the larger modification of the Centennial building is done, I would be surprised if there wasn’t a little more daylight and glass introduced, too. Not unlike Kettleson Library, which has both stone and glass. So I think there are some changes that are almost inevitable in Centennial as well.”

The next step in the pre-development process is to formulate a legislative request for funding – in this case, an estimated $4.1 million dollars. So far, Sitka only has money in the bank for parking and pedestrian improvements to the area. And some ambitious plans for improvements to Harrigan Centennial itself are in line ahead of proposed expansions of the museum or Kettleson Library.

None of the planning for the C-7 master plan, as the overall design Centennial building area is called, has been without some controversy. But Martha Schoenthal, a consultant with Foraker Group hired to assist the museum, said Sitka was doing it right.

“You all are to be really admired for moving forward and actually doing planning on all the different parts and pieces at the same time. So, give Michael (Harmon) a break now and then. Give Mr. Dinley a break. It’s really exciting what you’re doing.”

Michael Harmon is Sitka’s director of public works, who updated the audience on the construction timeline for traffic improvements in the area; Jim Dinley is Sitka’s city administrator.