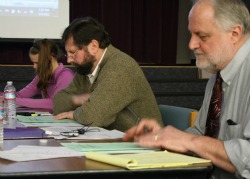 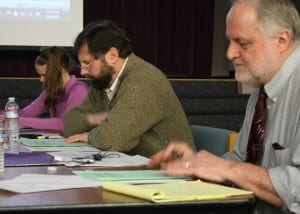 The Sitka School Board and the public got its first look at what might be cut if the district’s budget doesn’t improve.

The school district was staring at a nearly $1.3 million dollar deficit, but that number has improved since earlier budget discussions, where money was pulled from reserves to help close the gap.

Also, some anticipated money from the state, along with more money from reserves are helping the district make up some ground. Savings in health insurance costs and the planned reduction of a paraprofessional employee also result in some savings.

The deficit has been reduced to $340,000, which still could mean some painful choices for the school district.

With an audience of parents, teachers and students looking on, Supt. Steve Bradshaw distributed a list of ideas labled “Possible cuts.”

“There’s nothing on this sheet that I’m recommending,” Bradshaw said. “These are just the things we’ve talked about at this point.”

Bradshaw stressed that the items on the list are just ideas.

Included is doing away with art at the middle and high schools, which would save $180,000. Eliminating the high school activities director job could save up to $90,000. Combining the assistant superintendent and the special education director could save $100,000. And the list of possible cuts goes on. The librarian at Keet Gooshi Heen Elementary School. The cultural program. The auditorium technician. The middle school shop program. Music in early elementary school. Coaching stipends. The swimming pool at Blatchley Middle School.

“Please don’t let me get you guys in trouble,” Bradshaw told the school board, “but I’m at that point where enough is enough. … You know, would I want to shut down the swimming pool? We’re not even sure when Edgecumbe is going to have their pool. The last thing we need in this community is to have a swimming pool that we have to shut down. That’s major recreation for this community. Do I want to not pay our coaches? We ask our coaches to do more than any place I’ve ever been before. Most coaches would laugh at us for saying ‘We’re going to pay you $3,500 and you’re going to have to go out and raise $60-grand to do what you need to do to travel this year.’”

Bradshaw said the bottom line, though, is that any of the cuts will have an impact on the way the district serves its students.

Students in the audience had suggestions.

“So, if you got rid of half of your technology budget, you would completely get rid of this budget deficit,” Sitka High School sophomore Chaya Pike said.

Pike says teachers are more important than technology, and that the tech simply aids teachers in the way they do their job.

“It makes more sense to remove one aid and let them have many other aids in the forms of activities, helping students want to be in school, culture programs, helping students in other ways, tutors, mentors, other areas,” she said. “It seems like that would be a little bit more important than this technological crutch that is such a drain on our budget.”

Student school board member Nicole Seehafer made that point, too – that students don’t need the technology as much as they need the teachers, and that in many classrooms, the tech isn’t being used to its fullest extent anyway.

The district is planning to spend $427,000 on tech next year – part of a plan to ramp up its support for technology in classrooms and throughout the district’s offices.

School Board member Tim Fulton asked if there was any wiggle room, perhaps in some tech needs that might be deferred until finances improve.

School Board president Lon Garrison says it’s worth looking at and that he understands concerns that the district is somehow swapping out teachers in favor of improving technology. But he also said that improving district technology has been a long-held priority by the board, and that he’s hesitant to back away from it.

“I mean we were so close, two years ago, to having the entire district basically stop. It wasn’t just in the classroom technology,” Garrison said. “It was the business office it was – you teachers know as well as anybody that e-mail wasn’t working. You couldn’t go from one window to another. There’s a lot of different aspects of it.”

Bradshaw said he will follow the board’s directions on how to zero out the deficit. But he also said the district has cut everything it could possibly cut, reiterating that any cut will hurt programs.

The city annually contributes money to the school district, and with the city budget expected to be tight this year, school officials are not counting on an increase. And if the district resorts to burning through its reserves, it could find itself in a risky position should an unexpected expense come up.

The board wrapped up the work session by asking Bradshaw to come up with three options: The most drastic would leave $150,000 in reserves. The least would leave about $400,000.

A final vote on the budget had been planned for March 19. That could change. The school board is considering whether to hold off until the Assembly considers additional funding for the schools on March 27.

Some changes
Also Thursday , School Board president Lon Garrison reported that a critical piece of federal funding for schools and communities took a step forward this week.

One year’s worth of the Secure Rural Schools and Communities Act was added to the larger transportation bill in the U.S. Senate. Attaching the money to the larger package gives it a stronger chance of passage through Congress.

The amendment to add Secure Rural Schools funding got 82 votes in its favor. School Board president Lon Garrison said it could keep $500,000 flowing to the district. Its not guaranteed without further Congressional action.

That’s outside the three-year increase in per-student funding that Sitka and other school districts want the state to approve. Parnell opposes the increase. Garrison said approving three years’ worth of funding increases for school districts would give school boards more ability to plan their budgets. He said inaction on the idea is “unacceptable.”