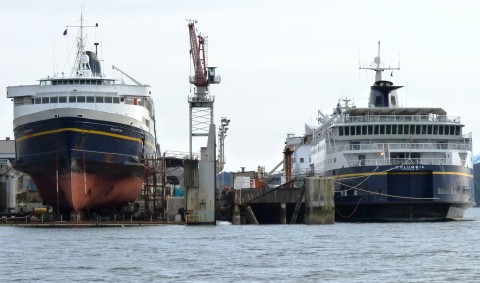 The state ferries Malaspina, left, and Columbia at the Ketchikan Shipyard in February. Photo by Ed Schoenfeld.

The state has moved a step closer to building the first Alaska Class Ferry.

Officials have completed a contract needed to hire Alaska Ship and Drydock to design and build the 500-passenger, 70-vehicle ship.

The document still needs approval from the Ketchikan shipyard, which was recently purchased by Portland, Oregon-based Vigor Industrial.

The state announced its plans last September, but the agreement has taken longer than expected.

Ferry Chief Mike Neussl says the shipyard will serve as both construction manager and general contractor.

“It’s new and it’s different and it’s not the way we’ve procured ships in the past, so we’re trying to be very thorough and make sure that we do that right,” Neussl said.

The state has $120 million to build the 350-foot, mono-hull vessel. It’s not clear whether that will be enough money.

The state’s Marine Transportation Advisory Committee has been pushing for the contract to be completed. Chairman Robert Venables says work should begin soon.

“Everyone’s committed to the process and I think it’s definitely going to stay front and center for MTAB as one of its top priorities,” Venables said.

The first Alaska Class Ferry will sail between Juneau, Haines and Skagway. It will have crew quarters but no staterooms, and will not sail overnight.

Venables and Neussl spoke during the Southeast Conference’s Mid-Session Summit in Juneau.