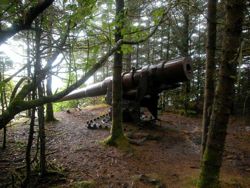 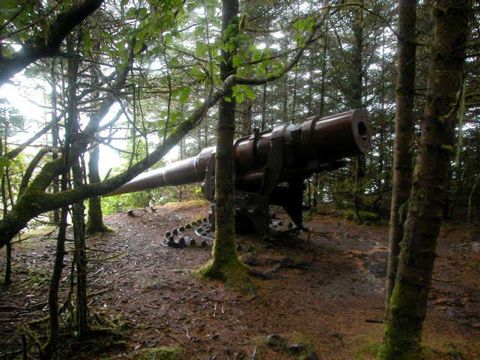 (Photos by Barth Hamberg, except where noted.)

One of the largest remaining pieces of World War II armament in Alaska is located on a tiny island in the mouth of Cross Sound, not too far from Glacier Bay. Residents of nearby Elfin Cove and Pelican have known about the big gun on George Island since it was put there early in the war, but it was only last year that the Forest Service redeveloped the historic trail to the battery, and a Sitka historian scoured military archives to piece together the gun’s bizarre story.

Matt Hunter is a lifetime resident of Sitka who now teaches math at Mt. Edgecumbe High School. He’s assembled two-thousand pages of archives on the Navy section base built in a cannery in Port Althorp, about three miles from the gun. Barth Hamberg is a landscape architect with the Forest Service. Theirs may be among the best Alaskan war stories you’ve never heard.

Matt – I’ve always been interested in aviation and airplanes since I was really little, and I started to read about the Battle of Britain and WWII. And then I learned that Sitka had a history. My dad, who arrived here in 1980, got to drive across the runway to go see the WWII causeway. And everybody in Sitka talks about the underground hospital out there — or used to — which as a young kid sounded like an underground skyscraper, that you could wander through these mazes of passageways. It turned out to be not that far from the truth, really. It wasn’t a hospital; it was a gun battery. But, being able to bike around Japonski Island and find pillboxes in the woods that are still there really spiked the imagination…. There’s a Navy document online that lists the bases in Alaska, and Port Althorp is there so I looked it up in Google Earth to see where it was, and didn’t really know that much about it until this summer I got a phone call from Barth Hamberg, who’s the trails architect in the Sitka Ranger District. And recently the Forest Service built a trail to a gun that remains on George Island, which is just two or three miles from Elfin Cove. 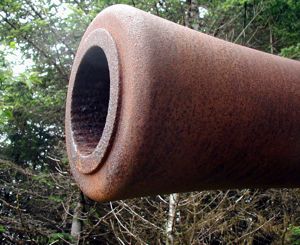 Barth – Well the first time I went there was about ten years ago, and it was basically just a game trail that led partially along the old road. The Navy actually had to build a road because this gun is quite big — it’s a six-inch gun. We called it a cannon until Matt corrected us on the proper nomenclature for it.

Matt — We’re talking an eighteen ton — what is that? 36,000 pounds — steel gun that was hauled about a half-mile over typical Southeast Alaska terrain. Rocky island. They started on one end of the island, of course, that was sheltered, to get to the other end.

Barth — Just the natural environment on George Island itself is fantastic because it’s like one of those places you see on the outside coast where not too long ago the ocean was just washing over the island. So the rock is very close to the surface, the soil is very thin, there are a lot of sea stacks, especially on the exposed side. It’s right on the edge of Cross Sound, so when it’s rough there are huge waves that come in and break on George Island, so it’s a very high-energy beach right there. Where the gun is located, there’s a bedrock shelf that goes out probably 500 feet, that only 20-feet tall waves would break over. All the flow from Icy Strait comes out through the Inian Islands, and flushes by George Island, so it’s tremendously rich marine waters. There are always whales out in front, there are sea lions. Salmon that are going up into Icy Strait are passing through that area. So, the biology is really rich, the scenery is rich, just from the quality of these really neat sea stacks — columns of rock — that stick straight up out of the beach. 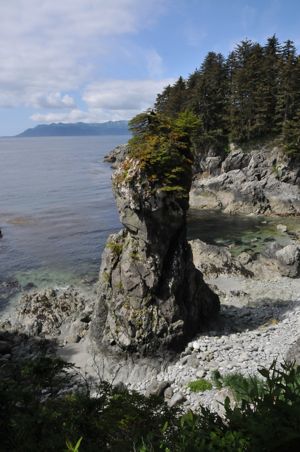 The trail at one point goes along a cliff that drops off a couple hundred feet into the water. And then of course when you get to the gun, the gun is intact which is a really neat thing. All of the other guns in Southeast that I’m aware of they either cut the barrels off of or they pushed them into the ocean.

Matt — It didn’t go so well. They fired it a few times after they got it in place in 1942, and then they covered it with a tarp. The base didn’t have a lot of extra people to go to George Island. Life on the island was difficult. They had quonset huts, very little water — none in the winter, because it would freeze. In order to fire the gun they ended up bringing people from Port Althorp, including the gunnery officer, who was an ensign. They set up a target and went through the whole drill. They took an entire day before with a bunch of guys doing everything from painting the deck — where people would stand when they fired it, to oiling the springs that go inside the tubes — quite an impressive amount of effort. On the fourth shot, the gun mount — this brass mount under it– sheared with a crack, and the gun jumped back a few inches. And the stand, where a man could stand, came down on a guy’s foot and broke his great toe. It (the gun) was out of commission for the rest of the war. 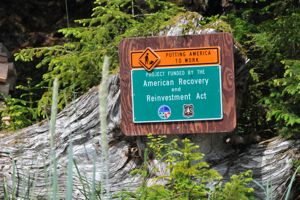 Barth — Just to see the thing, to think at all about how could it possibly get there, you have to understand that it was a difficult, difficult thing to do. We’ve talked about installing interpretation on the island, especially now that we have the information that Matt’s got, and it sounds like there’s potential for even more information, where we might get to see full site plans. We could show what it’s like now, and what it was like then.

Matt — The base dwindled. They ended up shipping men back to Sitka, and the men locked up leaving only two men there. In a matter of about a week, everybody was gone.

Barth — So this gun is still entirely in one piece. It’s kind of tilted down a little bit, but if you tilted it up to it’s normal position it would be pointed right at the Cape Spencer Lighthouse, which you can see from there. So, you’re looking across on a nice day — Mt. Fairweather is right there, all of Cross Sound, Cape Spencer. It’s a beautiful spot. 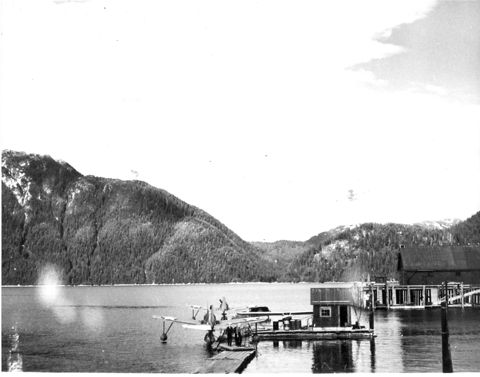