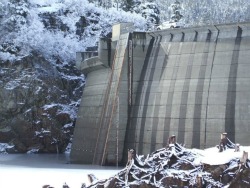 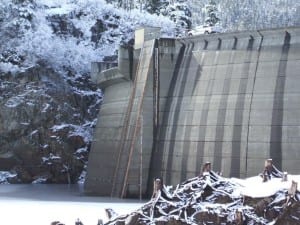 The Green Lake dam, pictured here in a file photo, is one of two hydro projects operated by the City of Sitka.

Shifting Sitka to more renewable sources of energy could keep millions of dollars from leaving the community over the next 20 years.

That’s the conclusion of a report released this week by the Sitka Conservation Society.

Work on the 22-page report was led by Scott Brylinsky, a former city public works official. Brylinsky says over the next 20 years, Sitka will spend more than $1 billion on oil.

“If we invest in renewable energy, there’s a good chance that we can save over $500 million of that money we would spend, and that the money would circulate in the local economy,” said Andrew Thoms, executive director of the Sitka Conservation Society.

The study considered existing technology only. It took into account the possibility of using wood products for heat, and the additional electrical capacity that will be added by expanding Blue Lake and developing another hydro project at Takatz Lake.

The study also makes recommendations. It says Sitka should develop a stronger plan for its energy future. It also says the electric department should be given the authority to charge higher rates when power is limited, and lower rates when excess power is available. It also recommends heat pumps for space heating, and other measures to increase energy efficiency.

“The Assembly started to take one of the first steps here the other night when they developed the program to help homeowners make investments to become more energy efficient with upgrading appliances and installing heat pump systems to get away from electrical resistance heating,” Thoms said. “That’s the first step in figuring out how do we as a community take advantage of all the energy efficiency programs that are out there, and invest in our homes and commercial buildings, so we’re not using as much energy and we’re not paying as high energy bills.”

Demand for electricity continues to grow in Sitka, and in recent months, the city has begun imposing a diesel surcharge on electric bills. The money is designed to pay for the high cost of operating diesel generators to supplement the power generated by Sitka’s two hydro projects.

Thoms says solving that problem will require a combination of actions.

The report was presented to the Greater Sitka Chamber of Commerce on Wednesday. And chamber members had questions. Garry White, executive director of the Sitka Economic Development Agency, pointed out that the energy calculations in the report assume all conditions remaining equal over the next 20 years. No economic growth, no change in population.

More people or more industry could change the picture somewhat.

And that notion sort of became the answer to another question: If we’re spending less money on oil in the future, won’t that mean less sales tax revenue for the city?

Yes, said the study’s authors, but hopefully loss of revenue there would be offset by the city’s ability to attract new jobs and economic activity once it’s able to provide more energy.

The Conservation Society, and the Chamber, hope the report is a jumping off point for more discussion and, hopefully, action. The report’s presentation leads into the upcoming Chamber luncheon on Wednesday, which will feature a panel discussion on energy in Sitka.