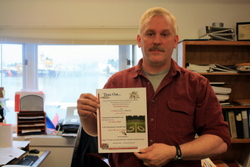 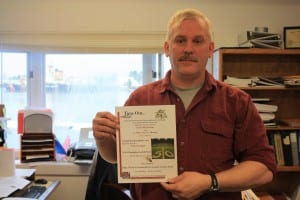 Jeff Feldpausch, resource protection director for the Sitka Tribe of Alaska, stands in his office with one of the tribe's ads protesting this year's herring harvest level. The tribe is worried the commercial fleet is overfishing a resource used for traditional food. (KCAW photo/Ed Ronco)

No samples were taken Tuesday, but test fishing will continue Wednesday throughout the sound.

The guideline harvest level — the amount fishermen can extract this year — is nearly 10,000 tons above last year’s level. That could be good news for the 48 permit holders in one of Alaska’s most lucrative fisheries.

But it also raises concerns with Sitka’s local tribal government, which has mounted a publicity campaign to protest the harvest level.

Last year, the commercial fleet pulled about 19,400 tons of herring from Sitka Sound. This year, that number is around 29,000 tons.

The big jump comes after the state corrected the way it ages the herring. An error in determining age meant scientists were underestimating the biomass, and therefore setting a lower harvest level. Fish & Game says, in essence, the increase in the harvest level is setting the bar back where it should have been all along.

But the Sitka Tribe of Alaska disagrees, and it has taken to newspapers throughout Southeast Alaska to say so. A series of ads placed in the Sitka Sentinel, the Ketchikan Daily News and the Juneau Empire state that 29,000 tons is roughly equal to 58 million pounds.

One of the ads claims that’s enough herring to cover a football field in 20 feet of the silver fish. The ads call the harvest “excessive.”

“Our concern is, we wanted people to visualize what was being removed from the waters around Sitka, and then to begin to question if those overall biomass numbers are correct,” said Jeff Feldpausch, resource protection director for the Sitka Tribe.

Fish & Game points out that the harvest is only ever 20 percent of the entire biomass. So, if we use that same math about that football field, the fish taken might be 20 feet high, but the fish left behind would be another 80 feet high.

The Tribe has doubts about the state’s methodology. Feldpausch says the state’s data is based on 3-year-old herring.

“So that means there’s two, three years of data that they don’t know what’s happening out there,” he said. “A precipitous decline in those brood years won’t be caught in the model until they hit age 3. You could be significantly over-harvesting these fish and not know it for several years.”

Steve Reifenstuhl, executive director of the Southeast Herring Conservation Alliance, says “the Department of Fish & Game has the best management and science anywhere in Alaska, or anywhere in the Pacific Northwest.”

The Alliance represents the commercial fleet.

“When the Department of Fish & Game took over management in the 60s, when we became a state, the biomass of the Sitka Sound herring was around 5,000 tons,” Reifenstuhl said. “Today it’s in excess of 145,000 tons – over a 20-fold increase. I think that speaks for the health of the resource, it speaks to the good management and the good science the department delivers.”

Reifenstuhl says the fishery benefits everyone in Sitka. It helps keep the city’s raw fish tax revenue up, and the hundreds of people who come to town every year to fish or support the fishery serve as something of a jump start for local merchants.

The Tribe and the commercial fleet have found some common ground. A deal struck at the state Board of Fisheries meeting last month set up a subsistence-only zone in Sitka Sound.

Roughly, the zone is between the southern portion of Middle Island all the way to the breakwater at the north end of Sitka Channel. (See a PDF map of the zone.) Reifenstuhl says it was a good compromise.

“It demonstrates that both sides were willing to come to the middle, even if they disagreed about the parameters. Really, this time is a time for healing,” he said. “The compromise was made. That’s good for Sitka. It’s good for the resource in the sense that the herring fishery can go on, subsistence needs can be met, they have been met in the past, and that’s good for Sitka’s economy.”

The final zone is smaller than the Tribe’s original request, but Feldpausch says the Tribe still considers it a victory.

The Tribe’s advertisements are done running. But one ad has been out of print for a while. The Tribe pulled an ad placed in Sitka that upset the city’s Chamber of Commerce. The ad carried the headline “Sitka Chamber of Commerce Protests Commercial Herring Fishery.” Below that, in smaller type, the date of that protest: July 3, 1954.

“At that point in time, it made sense,” Chamber Executive Director Jennifer Robinson said. “There was a significant lack of regulation, and herring reduction was actually one of the earliest commercial herring fisheries, practiced as early as 1878 in Southeast Alaska, and it was one of the most destructive fisheries. The Sitka Chamber was concerned at that time.”

Herring reduction refers to the practice of catching the fish to be reduced to oil and meal. The herring reduction fishery peaked in the 1920s and -30s at about 113,000 tons. Stocks declined and cheaper foreign sources of fish oil soon killed the fishery. The last reduction plant closed in the mid-1960s.

That’s about the time the state took over management of the fishery, and Sitka’s current herring fishery came out of growing demand for sac roe in Japan in the 1970s.

Robinson says her organization favors “a conservative, science-based approach” to managing the current fishery, and trusts the state to manage the fishery well. She says the Chamber does not oppose the fishery in its current form.

The Tribe also makes an economic argument about the fishery. Feldpausch says pulling fewer fish out of Sitka Sound would better protect the resource and allow fishermen to raise their prices. Later this week, we’ll explore that question further, along with the economics of herring.