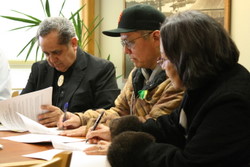 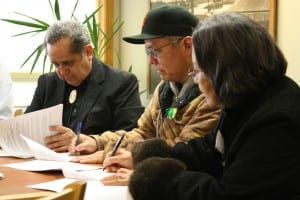 The Sitka Tribe of Alaska has reached a deal to manage sacred sites near Sitka. Five of the sites are already owned by Sealaska Corporation. And the deal for tribal management is one of a series of agreements signed or in negotiation throughout Southeast Alaska.

Those five sites already belong to the Native corporation. The sixth location is at Redoubt Falls. Acreage there has been selected by Sealaska, but is still in the conveyance process. The agreement won’t apply to that site until the land is conveyed. It’s effective immediately for the other five.

“We’re going to own it, but they’re going to manage it for their benefit,” said state Sen. Albert Kookesh, chairman of the board for Sealaska Corp. “All of these sacred sites are going to be in Sealaska’s ownership, but only because we’re the only train at the station that can get this as Congressional legislation. So we want to give it back to the tribes in some form, and the only form we can give it back to them in is a use agreement.”

The deal with the Sitka Tribe is the second that Sealaska’s made with a tribal government. The first was in Kasaan. Other agreements are in the works with organizations near Haines, Hydaburg and Hoonah.

Under the Sitka deal, the Tribe’s management must be consistent with traditional cultural practices. That includes fishing and fish processing by tribal citizens; gathering bark, berries, and other materials for cultural use; providing continual access to the sites for the Tribe and clans; and more.

Rosita Worl is president of the Sealaska Heritage Institute, which will work with the Tribe to develop a management plan.

“You have to maintain the sanctity of it, how it was used in the past,” Worl said. “For example, if they have the management of it, they can’t do any commercial development of it. It has to follow the law. The law says it’s a historic site, so it has to be protected as a historic site.”

Sealaska has legislation pending before Congress for the conveyance of sites throughout the panhandle. Those are separate from the ones included in the agreement signed Saturday.

But during the debate over the current bill, concerns were raised by some that local tribal governments didn’t have enough say-so in how the sites were managed.

Kookesh says this agreement should assuage some of those concerns.

“If they decide they want to have public visitations of that site, Sealaska’s not going to say ‘No, you can’t do that,’” he said. “It’s going to be their management decisions.”

Ted Wright is general manager of the Sitka Tribe of Alaska. He says the Sealaska deal signed over the weekend is good for both the regional native corporation and the tribal government.

“There’s always a concern when it comes to protecting lands that are within our traditional jurisdiction,” Wright said. “But the fact of the matter is, the corporation owns the land. And if we can work together to manage the land, then that’s a win-win.”

The parties that signed the deal – Sealaska Corporation, the Sealaska Heritage Institute and the Sitka Tribe of Alaska – have 30 days to change their minds. After that, any changes in how the sites are managed must be reached by another negotiated agreement.