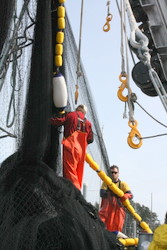 Crew aboard the Sitka-based F/V Pillar Bay tend to the net on Thursday afternoon. The 2012 herring season in Sitka ended Thursday, when ADF&G announced there would be no further openings. (KCAW photo/Ed Ronco)

What was poised to be the largest Sitka herring fishery in recent history has closed with less than half the quota caught.

Managers made the announcement Thursday morning to shut down the fishery for the year after three openings.

The Sitka Sound sac roe herring fishery depends on timing. The fish must be caught when the roe is mature but before the fish spawn. And this year, the fish spawned quickly.

In three openings, seiners caught about 13,500 tons – less than half the total guideline harvest level of 28,829 tons.

“You know, one thing the model can’t do is forecast surprises, and this is really a surprise,” Gordon said.

Early in their surveys, state managers saw what they considered a normal buildup of herring in all the usual places. They found some mature fish, but a lot of very immature fish whose eggs weren’t ready for harvest.

“That changed very quickly, and we were anticipating that might occur, where the more mature fish break away from the immature fish and hit the beaches to spawn,” Gordon said. “That happened very quickly.”

There were also gaps in the openings. The first two happened fairly rapidly, on March 31 and April 2. But then the fleet stood down for five days to allow processors a chance to catch up.

“The capacity is limited here for this fishery, and always has been, and I’m assuming always will be,” Gordon said. “It would certainly make it a lot easier if we could harvest the whole quota in two or three days. It would certainly get the better quality fish when they’re available.”

Only so many fish can be physically processed at one time. And with the end product headed for discerning gourmet markets in Japan, having the fish sit around waiting to be processed could risk quality.

ADF&G tracked 54.3 nautical miles of active spawn. Gordon says even though the fishery is over, there could still be more spawning. He says it’s too early to explain exactly what happened this year, and that managers will continue to conduct aerial surveys to monitor the spawn.

The impact of catching less than half the quota became visible in Sitka this week. Some seine boats left even before the state announced the end of the year’s fishery.

“We count on this fishery this time of year to help get the cash flow rolling in instead of rolling out,” said Kelly Warren, who owns two tender vessels participating in this year’s fishery – the Howkan and the Bainbridge.

Warren says a lot of fish still came out of Sitka Sound this year, and that it’s not the first time fishing has needed to stop before the guideline harvest level has been reached. Probably won’t be the last, either, he says.

But what does that mean financially?

“Well, for everybody, it’s a little bit different,” Warren said. “I just bought a third boat this year, and it’s down in the shipyard being worked on as we speak.”

Warren says he was hopeful they’d catch the entire quota and get a jump start on fixing up that third boat. With less than half the expected fish caught, he says he’ll take a financial hit, and some adjustments to plans for the rest of the year. But, he adds, sometimes that’s just the way it goes.

“One of the things that fishermen have that a lot of people don’t have is faith. It takes a certain amount of blind faith that when you go fishing you’ll catch some fish. Sometimes you do, sometimes you don’t, but it’s what keeps us coming back.”

And until the herring come back next year, Warren says he’s off to the rest of his season. One vessel will tender for southeast salmon in June and another one of his boats is heading down to Washington for sardines.