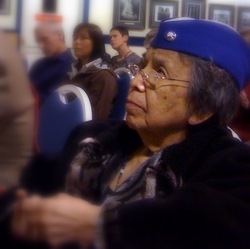 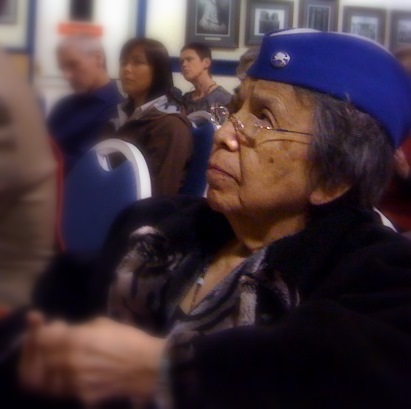 Isabella Brady testifies before the Sitka School Board in 2010. (KCAW photo/Ed Ronco)

A pillar of the Alaska Native community has died.

Tlingit elder Isabella Brady passed away early this morning (Wed 4-18-12) at the Alaska Native Medical Center in Anchorage, after suffering a fall in her Sitka home on Monday.

At the time of her death Brady was the president of the Alaska Native Sisterhood Camp No. 4, and a national advocate for Native issues.

Brady was born in Sitka in 1924, into the Raven Kik.sadi clan. She graduated from Sheldon Jackson School in 1942, began attending Jamestown College in North Dakota, but interrupted her education to join the Navy at age 19.

The cultural prejudices and discrimination she experienced in her youth would continue to inform her advocacy as an adult. In her lobbying efforts before the Sitka School Board and other legislative bodies, Brady often recounted stories of her own struggle to arrive at school every day, sometimes running a gauntlet of anti-Native sentiment in white neighborhoods.

Her grandfather, Peter Simpson, encouraged her to pursue her education. After the war, she completed college on the GI Bill, earning a BA in Social Studies, and returned to Sitka where she married William Brady in 1950. The couple had five children.

When William Brady was hospitalized for tuberculosis in the late 1950s, Isabella supported her family by taking a job teaching at Mt. Edgecumbe High School in Sitka. She taught US History, World History, Alaskan History, Civics, PE, Health, and coached basketball and volleyball.

Following her career at Mt. Edgecumbe, Brady would go on in 1974 to write the grant establishing the Sitka Native Education Program, which integrates cultural studies into the standard district curriculum, and has been a model for many similar projects nationwide.

Brady would later serve a long tenure on the board of trustees of Sheldon Jackson College. She eventually became a Presbyterian elder, and a board member for the Native American Consulting Committee of the Presbyterian Church. She also served as a board member for the American Association of Retired Persons, and the state’s Native Education Board.

Isabella Brady was 88 years old. She is survived by 17 grandchildren and 8 great-grandchildren. Many of her family were present when she died.

Memorial services are pending in Sitka. “But,” her long-time friend Jean Arnold says, “No building is big enough.”