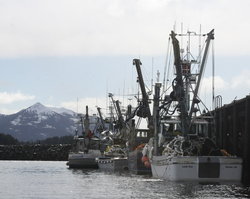 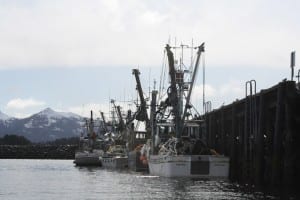 This year’s lower-than-expected herring harvest has renewed calls from the Sitka Tribe of Alaska to change the fishery.

The Tribe has long expressed worries about the amount of fish taken by the commercial fleet in the lucrative Sitka fishery. This year, fishermen caught only about half of what they were allowed.

The Tribe sees it as validation of a long-held concern. But a state biologist says although this year definitely requires some study, the model used to manage the fishery is still good.

Earlier this year, the Sitka Tribe of Alaska took out a series of ads in Southeast Alaska newspapers. They attempted to illustrate a predicted commercial herring harvest the Tribe felt was too large. Managers set a limit for the commercial fleet at just under 29,000 tons.

When all was said and done, the fleet captured about half that number. The reason? Quick spawning, said managers, and as it now turns out, a lower-than-expected return of herring in the first place.

Fisheries managers predicted about 144,000 tons of fish would occupy Sitka Sound this year. The current estimate of what actually returned is around 99,000 tons.

But for Jeff Feldpausch, it comes down to a simple question:

“Why are we fishing these fish when they’re the cornerstone of the majority of the marine ecosystem?” he said.

Feldpausch is resource protection director for the Sitka Tribe. This year’s harvest, he says, was a source of both comfort and alarm. On one hand, he feels it adds merit to the Tribe’s concerns. On the other hand, neither the commercial fleet nor subsistence harvesters had their needs met this year.

“You know, the ADF&G managers, they follow policy. We have to change that policy,” Feldpausch said. “That either goes through the Board of Fish process, through the Legislature, through referendums or citizens’ initiatives, or down the line through legal action if necessary.”

Gordon says the science behind the fishery is sound. The model is accepted by fisheries biologists up and down the coast, and he believes this year was a one-off. The model has performed well, generally speaking, but Gordon says it cannot forecast the unexpected.

“We’re dealing with natural populations that are subject to things like this happening,” he said. “Herring are well known to oscillate quite dramatically over short periods of time. It looks like something has happened with the Sitka Sound stock. What it is, exactly, we don’t know.”

But they’ll be looking at data throughout the summer, and the fall. An adjustment will likely have to be made for next year’s fishery, he says. Exactly what adjustment is will depend on the data scientists review between now and then.

Fish and Game recorded 55 nautical miles of spawn this year, which is down from last year. Still, Gordon says the population has been trending upward, and that herring populations are known to oscillate. What’s responsible for this year’s low return could be natural mortality from predators or illness. Or the fish could have relocated. But if that were the case, Gordon says they would have seen spawn elsewhere. There’s more to learn yet, and not just in Sitka Sound. Spawn was also lower this year in Hoonah Sound – five nautical miles were spotted, down from 12 last year.

Gordon says his team tries to manage the fishery conservatively, and that they feel like they have.

“I think we’re definitely concerned,” said Andrew Thoms, executive director of the Sitka Conservation Society. “We’re the Sitka Conservation Society, and therefore we’re a bit conservative about how we use the natural resources. I think we definitely need to take a conservative approach to harvesting a forage fish – herring – which is the base of the food chain.”

Herring are food for salmon, sea lions, whales and more. Thoms says his organization is keeping an eye on the issue, but not taking any official action.

“We’ve got no problem with a herring fishery and using some of the fish from the herring population, but we think it needs to be done with utmost caution,” Thoms said. “This year was kind of a wake-up call that we need to make sure everything is in order and be very careful about this fishery.”

And that brings us back to Feldpausch, with Sitka’s tribal government. The Tribe successfully petitioned the Board of Fish to establish a subsistence only zone in the waters just north of Sitka’s downtown. But he acknowledges that if it wants to effect any sort of larger policy change, his organization will need the help of other groups.

“It’s a lot of samples that need to be worked up by the lab, and they won’t be complete with that until the fall,” he said.

Once that data’s available, Gordon says they’ll take a look and get a much clearer picture of just what those fish did this year, and what it might mean for next.