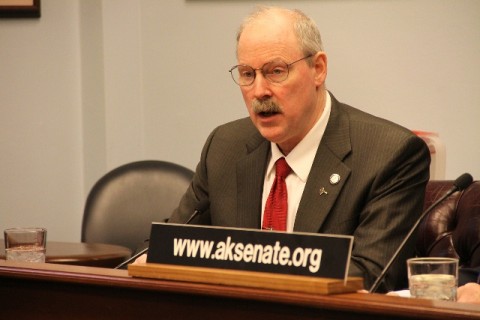 Sitka Senator Bert Stedman was a key player in this year’s oil-tax and gasline battles. And he managed the capital budget as co-chairman of the Senate Finance Committee.

He also focused on projects and issues in his district, which includes Sitka, Ketchikan, Wrangell and Petersburg.

One of Stedman’s main jobs in the Legislature is to assemble a list of public-works projects to go into the capital budget.

He starts with governor’s spending plan and works with other lawmakers to fit their priorities into the document. That includes expanding programs already on the governor’s list.

“One of the bigger issues will be the Roads to Resources Program that’s going on statewide. And there’s funds in the capital budget this year for the Southeast portion of that,” he says.

There’s money for Ketchikan’s Shelter Cove Road, a Kake-Petersburg
connection, two projects on Ketchikan’s Gravina Island and Sitka’s road to Katlian Bay. He says they will improve access to timber and gravel, as well as recreation areas, and watersheds needing restoration work. (Read more about the Kake road.)

There’s also money for Angoon’s Thayer Lake hydroelectric project and some small alternative energy efforts. But Stedman says this was not the year for putting large amounts of money into big hydroprojects.

“So that issue is not forgotten about. We’re going to continue to work on it. And it will hopefully be incremented every year, a little bit at a time. Some years will be a little bigger step than others,” he says.

“And over hopefully another next half decade to a decade, we’ll see some large hydroprojects put in place in Southeast. Large for us, small for the scheme of the state.”

He also got money for continued development of the Ketchikan Shipyard. He says that could help Alaska Ship and Drydock be among businesses supporting infrastructure for offshore oil and gas development.

“I think Southeast is uniquely positioned to facilitate maintenance and possibly construction of some of the offshore facilities that will be needed in the arctic over the next several decades. My hope is a lot of that work could be done here versus British Columbia or for that matter Korea or somewhere else,” he says.

Hundreds of projects are in the almost $3 billion capital budget. And past governors’ vetoes appeared to target Stedman’s district.

The Sitka Republican was well known this year for his opposition of Governor Sean Parnell’s oil-tax-cut legislation.

Stedman says the two should not be connected.

“I don’t expect the governor to use the oil tax debate as some form of a lever to veto projects out of the capital budget. That would be pretty blatantly obvious if that was done and it wouldn’t be beneficial trying to get to a solution to the problem,” he says.

Stedman hopes to return to the Capitol next year. The latest redistricting plan, which is still in court, puts him up against Angoon Democratic Senator Albert Kookesh.

If re-elected, he hopes to continue working on budget issues.

“Clearly I have an interest in finance. And broader than just the district or Southeast region, but statewide financial interests. I imagine I’ll have my fingers in the financial aspects of the direction of the state,” he says.

Stedman is a key player in the Senate’s Democrat-dominated bipartisan majority caucus.

He’s also one of a few Republican incumbents who could benefit from redistricting. He acknowledges his party may pick up a seat or two, giving it a majority. But he still thinks the 20-member chamber will need a bipartisan coalition to function.

“Eleven-nine is very difficult to manage. Whoever has 11 is dictated internally by the most extreme view on whatever issue is in front of them.”

Stedman has been in the Senate since 2003, when he was appointed to fill an open seat by Governor Frank Murkowski.

Hear a report on Stedman’s plans before this year’s legislative session began.