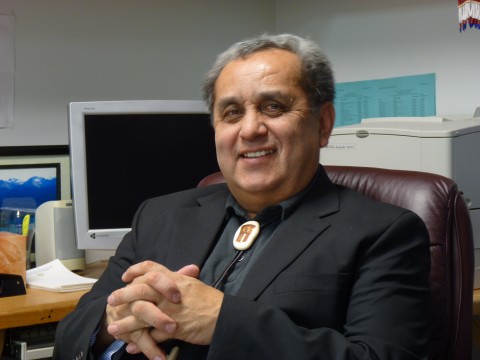 Angoon Senator Albert Kookesh focused on rural water and sewer issues this session. That, school meal programs and transportation issues are of interest to his district. That’s because it includes more than 100 villages and small cities from southern Southeast to Prince William Sound and into the Interior.

One of its big issues this year was part of the state’s plan for Southeast. One draft proposal focused mostly on roads, with mostly short-run ferries connecting pavement in mainland and island communities.

“That had people up in arms even though it’s only a draft plan. Something like that wasn’t acceptable to most of the people in the district, including myself. I looked at that and said to myself, well, that means walk-on people can’t afford to ride the ferry anymore because you have to have a car to get in between the land links,” he says.

State officials said it was only one of many options, and likely wouldn’t go anywhere. So far, it hasn’t.

One of Kookesh’s main priorities this session was a measure creating a water and sewer task force. He wanted to focus attention and money on the approximately 6,000 homes in rural Alaska without sewer and water hookups.

The task force legislation didn’t make it through. But he says some of the money did.

“We might have not taken a big bite out of the whole thing. But I think with the money we have now this year for new systems into the villages that don’t have water at all, we probably could retire maybe 25 percent of them next year if we can get all the funding put in place. We have most of it already now,” he says.

The Angoon Democrat is also pleased with the many projects in his Senate district that made it into the capital budget. That includes rescue boats, health clinics, harbor improvements and building repairs.

There’s also money for operations and debt retirement for the Inter-Island Ferry Authority, which links Prince of Wales Island to Ketchikan.

But he doesn’t want to be overconfident.

“I’m not going to count anything or jump up and down until after the governor’s veto process is over. I think everybody has to be aware of that, that the governor still has the opportunity to say no to some of those projects. And he said he would to those that he felt were unnecessary, even though we stayed under the spending cap he wanted us to stay under,” he says.

Kookesh also hoped to push through increased funding for school meal programs. He says that would have helped low-income students be ready for the classroom.

One of the year’s biggest legislative battles was over oil taxes.

Governor Sean Parnell called for lawmakers to lower them to spur exploration and development. Kookesh and the rest of the Senate’s Bipartisan Working Group agreed to incentives for new fields. But they said no to the rest.

“We thought there were so many people in Alaska who did not like the governor’s position on tax breaks. Many called it a $2-billion giveaway. I don’t whether it would have been eventually that number or not. I guess I was comfortable in not supporting the governor’s position on this, but also being supportive and liking the idea that we were going to give tax breaks to somebody who discovered new field,” he says.

This could be the Angoon Democrat’s final term in office. New legislative district boundaries put him in a difficult race against Sitka Republic Bert Stedman.

Kookesh says he plans to run hard, to keep a Southeast, Native, rural perspective in the Legislature. But the courts have twice struck down the official plan, leaving him wondering which race he’s in.

“I know I can start fund-raising now. And I can start campaigning, but I don’t know where to campaign. I’m like most people in Alaska (asking) where’s my district. What’s my lines look like?,” he says.

If elected, Kookesh says he’d push for a seat on the budget-writing Finance Committee. And he hopes another bipartisan majority forms in the Senate.

Click here to read or hear a report about Kookesh’s views from the start of the session.