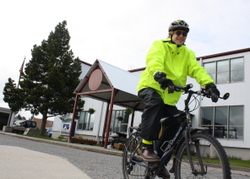 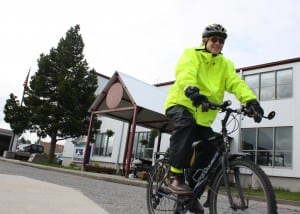 Doug Osborne pedals away from the University of Alaska Southeast's Sitka campus. UAS offered a pancake breakfast Friday morning, May 18, in honor of National Bike to Work Day. Osborne rides his bike to work every day, save one or two in the winter when the roads are bad. On those days, he walks instead. (KCAW photo/Ed Ronco)

Today is National Bike-to-Work Day, and Sitkans are among those celebrating.

Many biked to a free pancake breakfast in honor of the event, held Friday morning at the University of Alaska Southeast Sitka campus.

Jack Ozment was one of them. He’s been riding his bike regularly for some 40 years.

“When I lived in Virginia I belonged to a bike club, and we’d go out and ride in the back roads and see the country,” Ozment said. “I did triathlons for several years, and had to do a lot of bike riding to keep myself in condition so I could do a triathlon.”

Ozment rode four miles each way for the pancakes at UAS. He rides regularly still, mostly when the sun is shining, he says. He passed 80 years of age a while back.

“We try not to let that bother our operation. I just pass the birthdays and try to keep doing things; let the birthdays not count for anything,” he said.

Sitka also renewed its certification as a bicycle-friendly community this week. The League of American Bicyclists hands out the designation as part of National Bike Month. The award comes in part because of the infrastructure Sitka has set up for cyclists. The community has bike lanes on many of its roads, and shelters throughout town for bike parking. 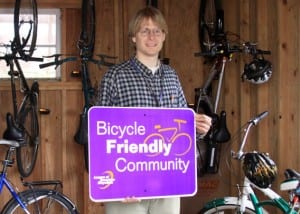 Sitka is one of 214 bike-friendly communities in 47 states. In 2008, it was the first Alaska community to be designated bike-friendly. Anchorage and Juneau followed in subsequent years.

Sitka has been at the “bronze” level of bike friendliness since its inception. Doug Osborne, with the Sitka Bicycle Friendly Coalition, says getting to gold would take more resources.

“For having volunteers and for having different businesses, and we’ve done a lot – it’s been great,” he said. “But if we want to go anything past bronze, we’d need an expert who’s working on it day-in and day-out. It wouldn’t have to be a full-time job, but somebody who at least half of their duties are figuring out how to make it more safe, doable, efficient, friendly for bikers and walkers.”

The Coalition reminds motorists to share the road with bikers, and reminds bikers to always ride in the same direction of traffic, wear highly visible clothing and lights, and use other common safety practices.