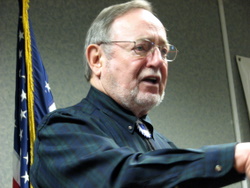 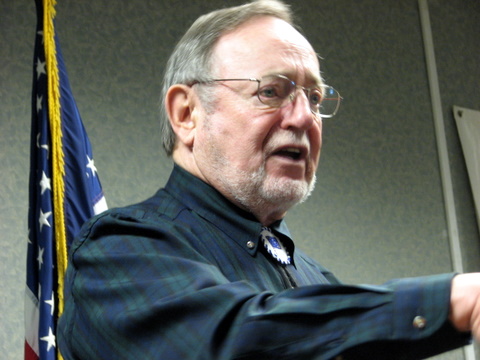 Alaska’s lone congressman says transparency is the problem with – and not the solution to – good government.

Don Young took advantage of the congressional recess to visit Sitka and speak at the Chamber of Commerce on Wednesday (5-23-12).

Besides sharing his nostalgia for the days before television cameras intruded into the capitol, the 40-year representative railed against younger Alaskan’s comfort with government largesse, and their lack of productivity.
Click here for iFriendly audio.
Don Young told the large Sitka Chamber audience that he’s 79 years old, feels 28, and acts 16. Wearing a flannel shirt and his trademark bolo tie, Young, who is the 56th-longest serving member of congress in the history of the United States, said the modern congress was more interested in the camera than constituents.

“I will say truthfully that we have the least functioning congress that I’ve ever served with. And why? Primarily it’s because of this TV camera right here looking at me. And the bobbleheads that represent the public instantaneously, and the response by the congressmen: Instead of doing what they believe is correct, they’re going to respond to what I call the instant information cycle. I’ve never been accused of that. I do what I believe is correct by the people of Alaska. And when you decide that it’s not correct, then I’ll have another occupation.”

Young had other complaints about changes in congress over his years of service, principally, the abdication of congressional budget-setting powers to the president.

Listen to Rep. Young’s entire address to the Sitka Chamber.

“We have neglected our duty. And I’ll be right up front with you – the classic example recently is earmarks. That’s our job as congress. We have the right – only us, the congress – to raise money and to spend money. And yet we somehow allow the president to set the priorities, and that’s not good for a democracy. Does it affect any of you in this room immediately? No. It’s a creeping disease that will eventually kill you. And the freedom that we had in the past will be lost.”

Young, who wears his conservative stripes proudly, mourned the loss of bi-partisanship. He attributed increasing gridlock to the fact that shifting toward compromise often came at a great political cost to members of both parties. He said more work got done when it was out of the public eye.

“In any type of formal legislation, transparency and knowledge of everything makes it impossible to work jointly together for the good of the people.”

But congress is not exclusively to blame for the country’s problems, Young said. The federal bureaucracy has always been a favorite target, as well as more specific failings, such as a lack of an energy policy, and excessive regulations. In Alaska, Young warned that residents had grown too comfortable, and it had affected our expectations and our productivity.

Young said it was impossible to “save our way to prosperity.” He thought the lack of young people in the audience was telling. He did find one twenty-year-old home from college, and challenged her.

“God has given us Earth and the state with the greatest resources in the world, and the brainpower to do it if we just have the courage and get off our duffs and do it. That’s our challenge, and that’s your challenge young lady. You may like what you have right now, but you’re going to have kids someday, and they’d better be able to get a job.”

Young is running for re-election this year. If Alaskans send him back to Washington, he’ll be the 26th-most senior congressman in the history of the United States. He told the chamber he has no plans to retire. “I’ll do this as long as God wants me to,” he said.