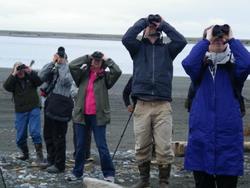 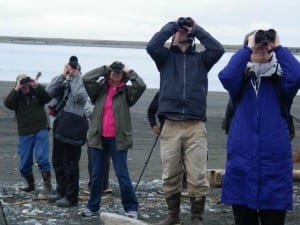 Tern Festival-goers look for birds on a beach near Yakutat, during the 2011 festival. (Photo: Yakutat Tern Festival)

The Yakutat Tern Festival returns for its second year this weekend.

A tern is a seabird.

“They nest in groups,” said Susan Oehlers, one of the festival organizers. “Here in Yakutat we have the Aleutian and Arctic terns.”

In fact, the Yakutat area is home to one of the largest and southernmost breeding colonies of Aleutian terns. This year’s festival includes a keynote address by author, naturalist and photographer Bob Armstrong, along with bird banding, basket making, tern viewing and even a play.

“They are adapting the story of the Ugly Duckling, and adapting it to terns,” Oehlers said.

This year’s festival focuses on the significance of birds in Native American culture.

It also will include research into Alaska Native culture. The Genographic Project, sponsored by the National Geographic Society, studies human movements by looking at DNA markers inherited across generations.

Theodore Schurr is an associate professor of anthropology at the University of Pennsylvania. He’s also the director of the Genographic Project’s North America Regional Center.

Schurr says the Genographic Project is seeking volunteers for the study, who will be interviewed about their genealogy and allow a cheek swab for a DNA sample.

“It’s the stories we’re able to see through the analysis of DNA, but also hear through people’s accounting of that history, and read through records, and see visibly on the ground through archaeology that really give us a very concrete sense for what’s happening, what people are experiencing, and what they’re trying to convey to us through their art, through their history and through their language,” Schurr said.

The project has conducted research into the history of people in Lebanon, Greece, South Africa, and all over the globe. Schurr says the goal is to figure out what links exist between different populations of people, and how those links have shaped the world.

The Genographic Project and the Tern Festival are both centered at Yakutat High School this weekend.