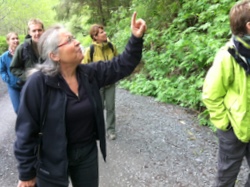 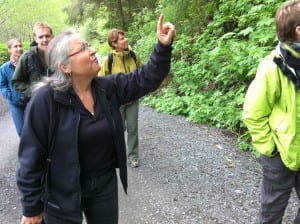 Sitka resident and Tlingit weaver Teri Rofkar takes staff from the National Museum of the American Indian up Blue Lake Road. The group was in town for field study, learning about the origins of many of the objects they keep track of in Washington, D.C. (KCAW photo/Ed Ronco)

Researchers from the Smithsonian Institution are in Sitka.

The group works at the National Museum of the American Indian. The collection, located near Washington, D.C., includes countless items from Alaska.

Staff members at the museum are well acquainted with those items. But they don’t often get to see where the items began. To do that, they turned to Sitka resident and renowned Tlingit weaver Teri Rofkar.

“We’re just walking up the road, guys, and we’re going to be looking on the uphill side,” Rofkar says to the group. “We’re looking for a fern that’s reaching out from the cliffs, from between the rocks.”

The group trudges up Blue Lake Road, looking for the maidenhair fern.

“It’s a fern that, for years, me and my self-teaching … I got the wrong fern forever. I kept getting the wrong ferns,” she said. “If you start looking around, there’s a lot of different ferns here.”

Eventually, Rofkar had to ask a friend for help. She recounted the conversation:

“I said, well, you know, Mary, I’m having difficulty getting those ferns. ‘Aw geez, I’ve got a bunch in my yard. Just come on over.’ And I said, well, where do you get them in the wild? ‘Honey! Have you been up to the dam at Blue Lake? Right at the base of the dam there’s lots of them.’”

This group does not need to hike all the way to Blue Lake. The ferns soon appear, popping out of the rock face next to the road. 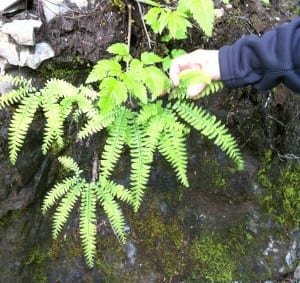 Teri Rofkar holds part of a maidenhair fern along Blue Lake Road. Rofkar was showing the ferns to a group of conservators from the Smithsonian Institution. (KCAW photo/Ed Ronco)

“See those black stems?” Rofkar says. “All right, boys and girls. You see them when you’re in looking at the baskets. It’s that brilliant brown shiny color. That’s some maidenhair fern there.”

The stems of maidenhair ferns are used in traditional basket weaving. These researchers from Washington, D.C., have likely seen thousands of the stems before, but in finished baskets that make up part of a museum’s collection, not as individual components in the wild.

The group arrived in Sitka on Friday night. By Saturday afternoon, when we walked up Blue Lake Road together, they had moved into lodging on the Sheldon Jackson campus, met with Native elders who had attended school there, visited Fortress of the Bear, and gone searching for ferns. Still ahead on the agenda was a kayaking trip, a meeting with carver Tommy Joseph at Sitka National Historical Park, and more.

“We’re overwhelmed,” she said.”We’ve been here for just a day, really. And being welcomed at the airport with the dance group, and having the elders there, and knowing what that means, is incredibly impactful for us.”

That’s Teri Rofkar, introducing herself by her Tlingit name. She says she wants to build bridges between those who preserve older Native art and objects, and those who are practicing the art.

“Because I think what’s happened is our old objects in the museums, while they represent a historical place, we’re still creating those pieces,” Rofkar said. “Now it’s time to start documenting and creating a repository of what’s happening today.”

This group is in Sitka with help from several granting agencies, including the National Endowment for the Arts and the Cargill Foundation. Rofkar says having them on the ground where they can see and touch and smell things, and take pictures, and record sounds, makes a big difference. She calls it place-based learning.

If McHugh, from the Smithsonian, is any indication, the place did its job. She says this trip will give them a new perspective when they head back to Washington.

“I feel like we treat the collection with respect, but I think it’s going to be approaching it in a way that we’ll have a greater understanding of who made these pieces, why they made them,” she said.

The Smithsonian conservators will give a public presentation at the Sheldon Jackson Museum on Tuesday from 5 to 6 p.m.