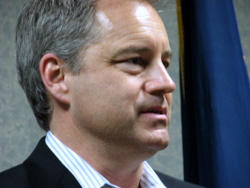 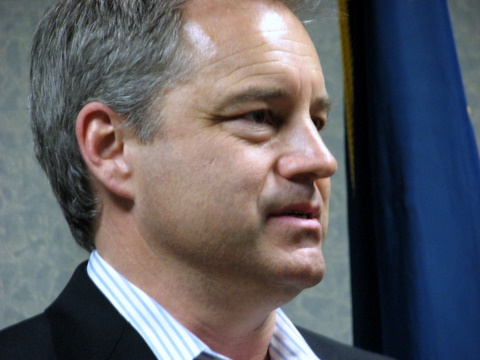 Click here for iFriendly audio.
Gov. Sean Parnell says he’d rather give communities like Sitka a fishing pole than a “bunch of fish.”

The governor’s twist on the old adage came during his remarks to the Sitka Chamber of Commerce on Wednesday (6-6-12).

Parnell spoke for about half of his twenty-minute presentation, and then fielded questions for another twenty minutes.

The Sitka audience was interested in everything from melting permafrost, to the in-state gasline, ferries, the EPA, and student loans.

The governor appeared well-versed in all these issues, and may have found talking about them a relief from the issue that has polarized Juneau since January: Oil tax reform.

Parnell backed legislation this spring that would have lowered taxes on the oil industry, in order to stimulate production. The bill stalled in the senate, however, and its future remains uncertain.

Parnell alluded to the controversy only once.

“There’s only one other governor who’s feeling as good as I am right now, and that’s the North Dakota governor. That’s because he’s seeing a bunch of license plates from Alaska in his parking lots, from oil companies going there to invest instead of here.”

Oil tax reform has been a tougher sell in Southeast than in the Railbelt, where more people are directly employed by oil. Sitka Senator Bert Stedman, who was in Wednesday’s audience, is an outspoken critic of the bill.

Governor Parnell edged back into safer terrain by talking about his administration’s policy of investment in communities. Sitka received $38-million in state project funding this year. In the following excerpt from his chamber presentation, he explains why he believes capital spending is a good idea.

“Right now, the bottom line in our economy, and our position as a state, is pretty darn strong, compared to the rest of this nation. Which means that we have a strong foundation to build from. I just had the opportunity to be in Ketchikan and Wrangell, and I’ve seen some opportunities there that I think would illustrate what could happen here in Sitka for years to come. I’ve seen in Southeast real opportunity when it comes to all the water we have. I live in Juneau now, and I know a little bit about that Southeast water, from above and below. (And I know it’s always like this in Sitka.) And you also know about water, about how cheap energy comes from water, and you make your living on the water. So, when I go to Ketchikan and I see that shipyard beginning to take root, the ferry that Sen. Stedman, I, and other legislators helped put together. And then in Wrangell, to see the boat yard there and the new haul out, the boats that are coming from Puget Sound and the boats that are coming from Alaska. I look at Sitka and say, You know, there is huge opportunity on the water here, as well. There’s opportunity in the maritime industries, opportunities with tourism, opportunities galore. But the question really is: What does Sitka want to be, as a community? Where do you want to be ten, twenty, thirty years from now? You’ve done some good planning in that regard. I’ve talked with the mayor today on where you’re headed. Our administration is focused on creating economic opportunity for you. Focused on strengthening families. Anything I can do in state government that creates an opportunity for you – as the mayor told me today – not hand you a bunch of fish, but hand you a fishing pole. Create that infrastructure that creates opportunity. Expand Blue Lake and then move on from there. Whatever I can do to create economic opportunity for you, I will do.”

While on his visit to Sitka, the governor also met with officials in city hall, and congratulated the graduating class at the Trooper Academy. Ketchikan, Wrangell, and Petersburg were also on his itinerary.

The governor also dropped by KCAW for a one-on-one interview. The conversation covered oil tax reform, tsunami debris, and the education budget, among other subjects.That story will be posted tomorrow.