This life was made for me 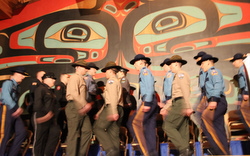 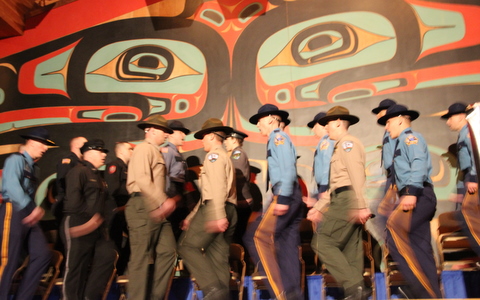 On Thursday (6-7-12), the Sheet’ka Kwaán Naa Kahídi echoed with the footsteps of fifteen newly minted graduates of the Department of Public Safety’s Training Academy, who marched in singing, “This life was made for me.” The graduates hail from police departments as far afield as Nome and Valdez, and from Alaska State Parks and the Alaska State Troopers. State Senator Bert Stedman and Public Safety Commissioner Joseph Masters were on hand to congratulate them.

“They have swam, climbed ropes, and walls, endured defensive tactics training, they’ve been pepper sprayed, they got shot with a taser, and were occasionally verbally motivated and have run more miles, and done more push-ups, than can be calculated,” he said.