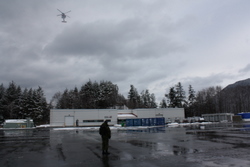 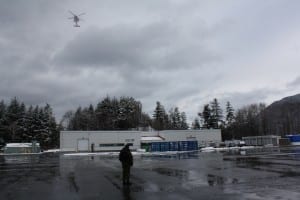 Heating buildings at Coast Guard Air Station Sitka costs more than $340,000 a year. But by installing a new wood pellet boiler, and no longer using oil for heat, the Coast Guard estimates it can cut that bill by a third. (KCAW photo/Ed Ronco)

The U.S. Coast Guard air station in Sitka is abandoning oil as a heat source.

Work will start soon on a new heating system that uses wood pellets instead of oil. It’s part of an effort to make the Coast Guard more energy efficient.

For years, the Coast Guard has used oil heat. They say the technology is tried and true, easy to deal with and relatively easy to obtain. So why would the Coast Guard switch to wood pellets?

“The Air Station burns about 85,000 gallons of heating oil each year, so you can calculate the cost based on that,” he said. “We’re paying in excess of $4 a gallon for heating oil.”

That equates to roughly $340,000 per year, just for heat at Air Station Sitka. Compare that to pellets, which Deering estimates will run about $300 per ton.

“A ton of pellets is equal to about 115 gallons of heating oil as far as the energy output,” he said.

By making the switch, the Coast Guard reduces its heating bill by more than a third.

At the same time, the Coast Guard also performed an energy audit. They looked at how they’re using energy now, and what else they might do to save money. Deering says there were some major revelations.

“For instance, over at our cutter, the Maple’s moorings, we know that the parking lot around that building has got enough lighting to do probably brain surgery, and that needs to be changed.”

City officials are taking notice of the changes.

“I think the Coast Guard has taken a very proactive approach in energy management,” said Chris Brewton, who runs Sitka’s Electric Department. “The billing cycle for the Coast Guard payment doesn’t actually go to the units, it goes to the Coast Guard finance center in Chesapeake, Virginia. … These guys didn’t have a clue what their energy consumption was. They just did it, and someone far, far away paid the bill.”

So about a year ago, the Electric Department started sending the unit commanders courtesy copies of their bill, so they can see how much energy they’re using. The Coast Guard is in the top five when it comes to industrial users of power in Sitka. Their efforts to become more efficient could make a difference for Sitka. And, Brewton says, they certainly set a good example as the city works to promote greater energy conservation among residents.

Sitka began offering rebates for energy efficient appliances, and there are statewide programs doing much of the same. All of it fits into a larger picture of a city trying to save power. Brewton hopes doing so will cut down on the need to run back-up diesel generators, which cost the city $1 million in the last year.

“That’s a million dollars of value that’s left this island forever. It’s gone,” he said. “A million dollars of our income and our wages have left the town forever, and that’s what we want to avoid. So a little bit of sacrifice by everybody will make a big difference.”

The Coast Guard, meanwhile, will begin work on its wood pellet boilers soon, with the goal of completing the project before the end of the summer. It hopes to replicate the work at its installations in Ketchikan and Kodiak, too.